Stats as Chelsea set to maintain 100 percent record against Brighton

Chelsea will be looking to maintain their hundred percent record against Brighton when the sides match-up on this weekend.

The Blues will be looking for a first home win of the campaign following their first win of the season in the 7-1 white-wash of Grimsby in the Carabao cup during the week.

Chelsea and Brighton meet for only for the ninth occasion in the league (fifth in the top flight) and 13th overall. 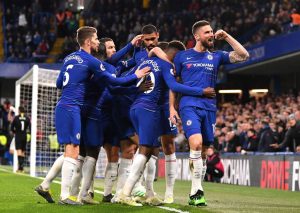 Brighton who have enjoyed victory against Premiership oppositions in the past save Chelsea will be looking to break that jinx themselves.

Brighton have lost each of their past 10 games against Chelsea in all competitions, conceding 23 goals and scoring twice in return.

Brighton’s only victory against the Blues was in the third round of the FA Cup in 1932/33 (our first meeting). George Barber scored the only goal in a 1-2 defeat.

Frank Lampard’s side had a Sunday to forget last week in a defeat to league leaders Liverpool. The defeat was only their second home defeat in 25 home games. 13 wins, 10 draws and 2 losses for the Blues in the last 25 at the Stamford Bridge.

Frank Lampard’s side are seeking a clean sheet for the first time this season. The last shut out came at Leicester in May, 10 games ago.

Brighton are without a win in five Premier League games and have enjoyed one victory in their last 15 games in the competition, drawing six and losing eight.

Brighton have won four points from their three away Premier League games this season. They won the first 3-0 at Watford, lost 0-4 at Manchester City and drew the third at Newcastle last weekend.

“The best player in the world loves Barcelona” – Laporta vows to…