The coach of a Paraguayan club, Libertad de Paraguay, Leonel Alvarez has been allegedly fired by the club after cheating with the wife of one of the players on his team.

According to media reports in Paraguay, the 51-year-old Colombian national had been secretly going out with the cheating model, Patty Gonzalez, who is married to Edgar Benitez, a star player on the team.

However, Patty has denied the news, stating that the accusations are not true. Through her social media channel, she said, “I assure you it’s completely false.

“From my side, it’s clearer and I hope people from the club clear up the situation at some point. “The truth is that we have nothing to do with the situation, we are unconnected with what happened.” 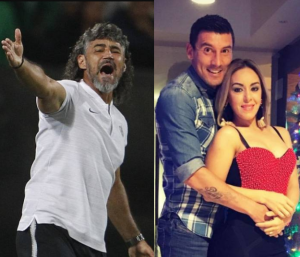 The disgraced coach has not made any public statement about the on-going drama. Although his assistant, Ruben Dario Bedoya, spoke to reporters saying, “We came to training at 7.30am but they didn’t let us go in. “It doesn’t seem professional to us, it’s shocking treatment. It surprised us because if a decision is made, one must be allowed to enter and take their belongings. It’s disrespectful.”

The club’s lawyer has also reacted to the incident stating that the coach had lost his “power of management over his staff and players. However, he did not give further details.

During a press conference, he said, “It has been decided to end the working relationship with Leonel Alvarez and his technical staff for motives only linked with the fulfillment of his contract.

“Alvarez’s contract establishes a series of obligations, one of which deals with his power of management over his own technical staff and the squad of players, along with his relationship with the Governing Board.

“Incidents happened last week which made us consider these obligations unfulfilled. ”

The lawyer subsequently explained, “All the stories that appeared are the product of the fantasy of malicious people, who want to affect the reputation and good reputation of players and families of the club.”

Also, read: “We are not for sale’’ – 28 Lagos guber candidates deny endorsing Sanwo-Olu for N100k