The Colombian President Juan Manuel Santos was announced the winner of the 2016 Nobel Peace Prize today, October 7th 2016, in recognition of his efforts to end the five-decade civil war that had killed more than 200,000 people in Colombia.

Speaking on the award, President Juan Manuel Santos said he received the award in the name of the Colombian people. 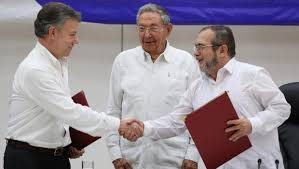 According to Associated Press, the award came just days after Colombian voters narrowly rejected the peace deal that Santos helped bring about.

Nobel judges conspicuously did not honor his counterpart, Rodrigo Londono, the leader of the rebels.

Santos and Londono — the leader of the Revolutionary Armed Forces of Colombia, better known by his nom de guerre Timochenko — signed a peace deal last month to end Latin America’s longest-running conflict after more than four years of negotiations in Cuba.

Six days later, Colombians rejected it by the narrowest of margins — less than a half percentage point — over concerns that the rebels, who were behind scores of atrocities, were getting a sweetheart deal.

Under the accord, rebels who turned over their weapons and confessed their crimes would be spared jail time and given 10 seats in congress through 2026 to transition to a political movement.

In addition to a cash reward of nearly one million dollars, Nobel prize winners will also collect a medal and a diploma at the award ceremonies on December 10, the anniversary of prize founder Alfred Nobel’s death in 1896.

A record 376 candidates were nominated for this year’s award, which carries a prize of 8 million Swedish kronor (about $930,000).

The 2016 Nobel Prize season kicked off with the announcement of the prize for medicine on October 3rd 2016, and will be followed over the next 10 days by other science awards and those for peace and literature.

Of Gridlocks And The Abuse Of Traffic Lights In Sokoto State