The Commissioner for Information in Imo, Mr Emeka Ebiliekwe, has commended Miss Ezichi Nwulu who won the 2019 Most Beautiful Girl in Imo for her pet project on rape victims. 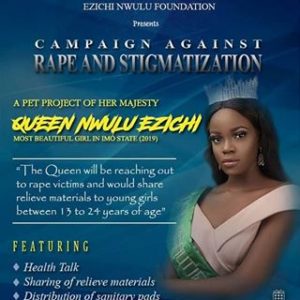 The commissioner gave the commendation when Queen Ezichi and organisers of the Imo Beauty Pageant 2019 paid him a courtesy visit in his office on Monday.

He observed that rape is associated with a lot of consequences like emotional trauma, fear of the unknown and fear of the opposite sex, while the victim could get pregnant, contract HIV or other sexually transmitted diseases.

Ebiliekwe commended Ezichi for taking the bold step to campaign against rape which he described as one of the social vices in the society and promised to support her in any way possible to enable the project to succeed.

The commissioner also commended the organisers of the 2019 Imo Beauty Pageant for being fair to all the contestants and also the committee on the upcoming launch of the pet project.

Queen Ezichi in her remarks, described rape as a very serious vice in the society.

She said she took up the pet project on the campaign against rape and its associated stigmatisation to empower young girls who were victims.

Ezich used the opportunity of the visit to invite the commissioner to the launch of the project slated for Nov. 23 at Imo State University (IMSU) Auditorium.

Earlier, Mr Clinton Briggs, the Chairman of the Most Beautiful Girl Beauty Pageant in Imo, said Ezichi emerged winner through a rigorous process in spite of being the youngest of the 17 other contestants in the second edition of the pageant.

He said Ezichi possessed rare qualities of self-confidence, boldness and brilliance, adding that her choice of rape as her pet project was a welcome idea.

Briggs described rape is an epidemic that had affected most homes in the country and called on well-meaning Nigerians and Imo people to come out and support the project.

He said part of the project launch was to give the succour to rape victims in their various areas of need.

Woman Drags Businessman to Court for Alleged Sodomy In Kaduna