Levante grabbed a surprise win against Barcelona in the Copa del Rey on Thursday. And they’ll be glad they did.

Ernesto Valverde fielded a very much rotated team. The likes of Messi and Suarez were removed from the line up while Jeison Murillo was given a chance to prove himself in the first team. 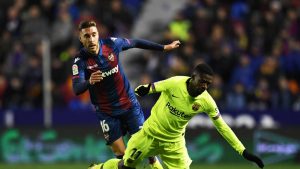 However, the team rotation did not help matters as Barcelona were 0-1 down just after three minutes. Erick Cabaco found his way around a sloppy Barcelona defence and hit a good header past Jasper Cillessen.

Levante then doubled their league in the 18th minute through Real Madrid’s loanee, Borja Mayoral.

The home side created more chances after then and almost had another goal. However, Barcelona were able to grab one goal back through a penalty kick. Denis Suarez tripped from Coke’s tackle in the box and the referee was left with no choice than to point to the spot.

Philippe Coutinho then got on the ball to convert the penalty kick.

Barcelona will hope for a better result when they host Levante next week. Equally, Valverde would have learnt from the defeat and would probably field more A list players.

Why We Can’t Propose To Men – Abuja Women