A Federal High Court in Port Harcourt has ordered the forfeiture of  244 vehicles, include 154 oil tankers that had been filled with illegally refined petroleum products.

The vehicles and their drivers had been arrested by a patrol team in Division six of the Nigerian Army and were later arraigned for fraud by the Economic and Financial Crimes Commission before Justice I. M Sani in the state.

Confirming the order by the court, EFCC, in a statement, wrote, “Justice Sani ordered that the EFCC, in conjunction with the deputy chief registrar of the court, should conduct the sale of the vehicles and the illegally refined petroleum products they were carrying while they were arrested.”

The Judge equally stated that the deputy chief registrar of the court should ensure that the money realized from the sales of the vehicles and their content is sent to the Federal Government’s Revenue Account.

See a photo of the confiscated trucks below. 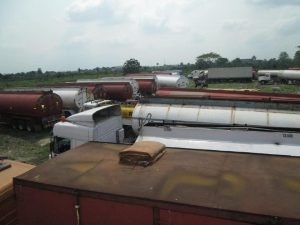