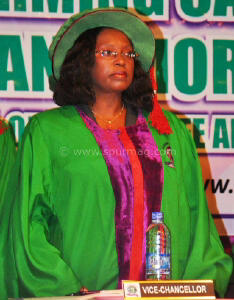 Professor Aize Obayan, a former Vice Chancellor of Covenant University, Ota has been suspended from her position as director of the Education Commission of the Winners Chapel by the church’s general overseer, Bishop David Oyedepo. Ms. Obayan was suspended for reportedly altering examination results for several students in the department of Mass Communications. Among the students who benefited from the former VC’s grade alteration was Ms. Obayan’s own daughter. The former VC was accused of perpetrating the academic fraud during her tenure.
The former VC’s daughter graduated with a Second Class Upper Division in Mass Communication and is currently doing her National Youth Service Corps service. A source at the university revealed that Ms. Obayan inflated all of her daughter’s scores, otherwise the young woman would have earned a Third Class degree.

Recently, a Dr. Omojola, a lecturer in the Department of Mass Communication, petitioned the Chancellor of the University after his first protest was suppressed by the then VC. In his protest, Mr. Omojola alleged that Nnamdi Ekeanyanwu, the acting Head of Department of Mass Communication, had engaged in extensive alteration of students’ examination results. The petition led to Mr. Ekeanyanwu’s removal as Head of Department. Dr. Stanley Ngoa replaced him, but spent only the 2011-2012 session at the helm, before the former VC reappointed Dr. Ekeanyawu to return as departmental head.

Our source indicated that, with Dr. Ekeanyanwu’s return, the fraudulent practice of grade alteration worsened in the Mass Communication Department and across other departments of the university, including Chemistry where one student’s score was raised to 45% from 5 %, an outright failure. Associate Professor Taiwo Abioye, Deputy Vice-Chancellor, Administration, headed a panel appointed by the Chancellor, Professor C.K. Ayo, to investigate the case. Dr. Ekeanyanwu was summoned by the panel to defend himself on charges of altering examination scores of students, including Miss Obayan, for monetary benefits. He not only accepted his guilt for all the charges, but also confessed that he acted in collusion with the former VC, Professor Obayan.

Ms. Obayan was also invited to appear before the Abioye panel, but she reportedly offered no defense.

Pastor Faith Oyedepo, wife of Bishop Oyedepo, has taken over the duties of Ms. Obayan at the church’s secretariat. SaharaReporters learned that plans were underway to return Dr. Daniel Rotimi to the Education Commission. Mr. Rotimi was a one-time registrar of the University. SaharaReporters learned that Mr. Rotimi, who is a pastor, last year married a second wife (a former student at Covenant University) in his quest for a male child. He and his first wife had only girls. A lecturer at Covenant University told SaharaReporters that he wondered whether the university could really realize its much touted claim of raising a new generation of African leaders when top officials at the school offer examination grades for sale?

David Owoyemi: Who moved my CASH?