If Samuel Odih,  a National Youth Service Corps member in 2012, was to turn back the hands of time, taking part in the nation-wide compulsory youth service scheme is a part of his life that he want to erase.  He wishes he never took part in the exercise after a life-threatening experience in Imo State, where he served the nation as a corps member.

The Delta State-born former students of Covenant University, Ota, Ogun State, was reluctant to proceed to Umuguna in Imo State, where he was posted for the service year after his university education, but he had to go.

“I was posted to Umuguma in Imo State for my NYSC. At first, when I got my letter, I didn’t feel too good about the fact that I would be far away from my parents. But, I kept reassuring myself that it wouldn’t be too long before I returned home. I thought within myself that it was better than being posted to one of the states with security challenges,” says Odih, who later came close to losing his life in the community where he served.

“I had prayed against being posted to some of the states where religious problems have led to the death of innocent souls including some youth corps members.So, being posted to Imo State was not really bad because the state is peaceful. I never thought of being attacked, getting injured or coming close to losing my life. I also looked forward to getting a job and starting a new life after the service,” he adds.

Odih, 23, was however wrong in his assessment. Teaching was his preferred primary assignment after the orientation camp. He got his wish as he was posted to a secondary school in Umuguma.

“After settling down in the camp, it was time for us to kick off our Community Development Service. I opted to teach because I loved the fact that I would be imparting knowledge in the leaders of tomorrow. I was then sent to Ara Secondary School, Umuguma, to teach J.S.S.1, 2 and 3 students HIV/AIDS awareness,” he says. 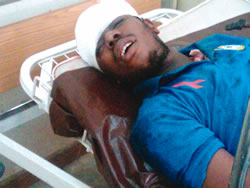 Filled with joy, Odih resumed at the school in January 2012. It was a smooth tale until two months after when things went awry when he was allegedly attacked by a pupil.

“On March 8, 2012, I went to the school for my usual CDS. Some students were making a noise at the back of the class but I tried to ignore it, thinking that as time went on, we would get to know ourselves better. But when the noise became unbearable, I told the pupils to concentrate or leave the class. But some of them stood at the window of the class and continued their discussion; they were disturbing the class. I asked them to leave the class but one of the pupils refused to leave. I threatened to report him to the school authority, so he reluctantly left,” he stated. But that peace was temporary.

He said, “I was backing the class when I heard an unusual noise among the pupils. Apparently, some of them were trying to warn me of imminent danger by calling my name but by the time I looked back, it was too late. I was hit with a cutlass at the side of my head. I fell to the ground bleeding profusely. I fainted.”

Odih said he was  taken to the Imo State Specialist Hospital where he was told that he cheated death because the cutlass missed his brain by a few inches.

“I underwent numerous surgeries because the cut was very deep. The doctor said I was lucky to be alive,” he stated.

Odih was not alone in the misery. His parents became depressed and saddened by the attack on their son.

“When my mum heard the news, she just burst out in tears. She was traumatised. She couldn’t hold herself. She was disturbed emotionally as she could not hear my voice for about two days. She refused to eat or sleep until she saw me in the hospital.  She went to the orientation camp and requested for my redeployment but her request was turned down.”

His travail was not over as he was left alone with the NYSC officials allegedly relunctant to visit him. When the zonal coordinator eventually did, settling the hospital bill became an issue.

“It was only after my mother visited the orientation camp that the NYSC coordinator, Mrs. Chinwe Ojukwu, paid me a visit at the hospital. She deposited about N30,000 for my hospital bill. Meanwhile, the total bill including travelling expenses for my parents was over N100,000,” Odih said, adding that Ojukwu did not pay him another visit on his hospital bed.

“My parents had to struggle to pay the bill. It wasn’t easy for them and I felt bad,” he stated. But Odih was not entirely lucky as the injury left an indelible damage to his life.

“As a result of the injury, I lost sense of touch on my hands, I experience frequent memory loss and phobia for sharp objects. I had to visit LUTH for medical examination and did a Brain CT scan when I had difficulties in writing and spelling words. I also developed itches on the injury spot and constant pain.”

The victim of machete attack is calling on the NYSC to pay back the balance of the hospital bill to his parents.

“My parents should not be responsible for the bill. NYSC should pay them back the money. Corps members should have an insurance cover in case of incidents like this. It’s not right that nothing is being done about my case.

“The incident happened while I was serving. NYSC is meant to pay for my hospital bills. I have made several calls to the coordinator; I have sent several text messages to her. I wrote a letter and attached receipts of the expenses to it but I have not heard from the NYSC,” he said.

The  Public Relations Officer, Imo State NYSC, Mr. Orunta Ugo,  however said officials of the scheme visited Odih many times while he was in the hospital. He added that Odih’s parents later took him to Lagos for further treatment.

Ugo stated, ‘‘ Odih’s parents later fsent us the bill of over N100,000 as the cost for his treatment in Lagos. We have sent it to the national secretariat in Abuja for  approval. His allowance was paid even though he was not around. Also, Ben Aboh, who is the inspector  in the local council area where Odih served,  visited him many times in the hospital before he was moved to Lagos.’’