A fully-vaccinated American couple has died of COVID-19 a few minutes apart.

Cal and Linda Dunham of Grand Rapids, Michigan died after they were taken off life support on Monday.

Daughter, Sarah Dunham disclosed that her parents contracted the virus on a family camping trip despite being fully vaccinated.

“[My dad] called me before our family camping trip and said he wasn’t feeling good but he thinks it’s just like sinus, and [Linda] caught it and she’s like, he gave me his cold,” she said.

“The third day they woke me up and said, ‘we’ve got to go because we don’t feel well.’ So I packed them all up and they left.” 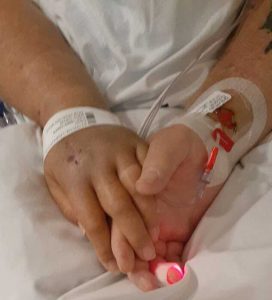 The couple’s condition worsened within days and they were placed on ventilators.

They had pre-existing conditions which complicated their health, she said.

As they were on hospital beds placed side by side, the couple held hands as they took their last breath.

“The love that they found together after a previous marriage is fantastic.

“They were the people that you just looked at and you were like, ‘I want to be old like that, I want that love when I’m that age.’”

Football: We will not underrate CAR in second leg – Coach