Two other individuals have been gunned down by suspected cultists in Cross River State after the killing of one James Chia, a student of the Cross River University of Technology, Calabar Campus.

Recall that James had just written an exam and had stepped out of the hall when he was attacked, shot at and axed by a rival cult group in the school.

Now, in what seemed to be a reprisal attack, two young men have been killed at Palm street and CRUTECH Pavilion field in Calabar.

While the attacks were as a result of a renewed cult war, the identities of the latest victims have not been identified yet.

See the graphic photos below. 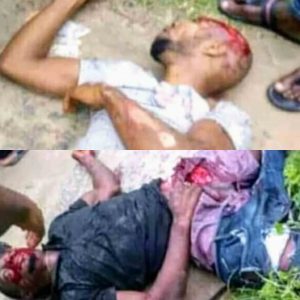 Also, read: Obasanjo spoke the mind of Nigerians and should not be castigated – Apostle Suleman