African American rapper, Dababy, raps about having sex with female rapper, Meghan Thee Stallion “the day before she said that Tory Lanez shot her.”

Baby on Baby 2, a 14-song album by DaBaby, was released on Friday, September 23.

The notorious North Carolina rapper is explicit about alleged sexual encounters with Meghan Thee Stallion on the album’s track “Boogeyman.” 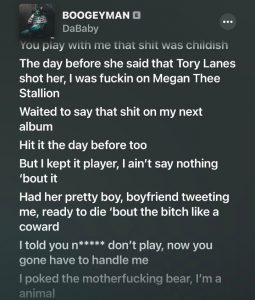 On the track, he raps “The day before she said that Tory Lanez shot her, I was fuckin on Megan Thee Stallion,” referencing the alleged shooting of Meghan by Tory Lanez on her foot.

“Waited to say that shit on my next album/Hit it the day before too/But I kept it player, I ain’t say nothing ’bout it/Had her pretty boy, boyfriend tweeting me, ready to die ’bout the bitch like a coward/I told you niggas don’t play, now you gone have to handle me/I poked the muthafuckin bear, I’m a animal.”

The second segment of the song is a reference to his Twitter fight with Megan’s boyfriend, Pardison Fontaine. Following a social media altercation between Megan and DaBaby in which Baby reposted a joke about Tory shooting Megan and joined Tory on the track “Skat,” the tension between the two men reached a breaking point.

“YOU NIGGAS IS CORNY alotta you women is corny,” Pardi tweeted. “ANY NIGGA THAT SHOOTS A WOMAN IS PUSSY ANY NIGGA THAT SIDES WITH IT ..CONDONES IT AFFILIATES THEY SELF WITH STANDS BESIDE THAT TYPE OF BEHAVIOR IS A BITCH ANY WOMAN THAT SUPPORTS IT FOR ANY REASON IS A FUCKIN SAD BITTER OR CONFUSED.”