Popular OAP Daddy Freeze has reacted to the founder and General Overseer of the Kingsway International Christian Center, KICC, Pastor Matthew Ashimolowo’s claims of being a wife-beater.

The highly placed Nigerian cleric, Pastor Matthew Ashimolowo had earlier shocked his viewers after he compelled his congregants to give a thousand dollars for every year each of them had lived on earth.

He demanded in a church service that his members give what he described “the seed of Glorious expectation”, which is according to the number of years they have lived on earth.

The video which went viral was heavily criticized by #Freethesheeple leader Daddy Freeze, who stated that the church was extorting ignorant worshipers of their hard-earned money in order to fund the flamboyant lifestyle of their pastors.

Reacting to post, the Man of God alleged that Daddy Freeze was a wife-beater who molested his first wife which led to his marital crisis that eventually caused their separation.

Taking to Instagram to react to the allegation, Daddy Freeze wrote;

“I didn’t beat my Ex-wife or break my Son’s knee. It’s the petty lies they tell when they don’t have scriptural backing”

He also took a swipe at Apostle Suleman “I heard that even the ‘otobolizer’ himself ‘daddy come and eat’ took a swipe at my personal life, from what moral grounds if i may ask?

All this is a smokescreen to make the waters murky and avoid the question at hand which still stands firmly, unshaken!

WHERE IN THE BIBLE DID JESUS OUR HIGH PRIEST, OR THE DISCIPLES, OUR FIRST PASTORS COLLECT TITHE? ~FRZ” 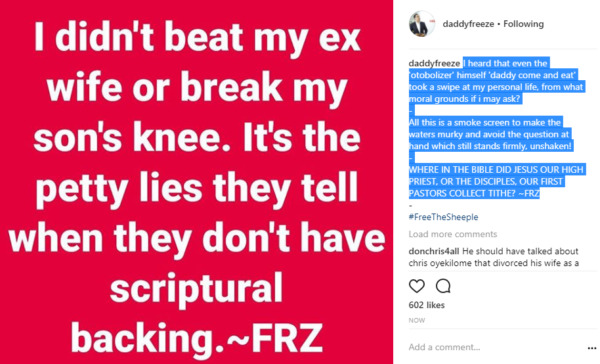 MOBO Awards: Jude Okoye lashes out at Politicians Over Congratulatory Messages to Wizkid and Davido