Botham Jean was shot twice by white female ex-Dallas police officer Amber Guyger in his Dallas apartment on Sept. 6 2018. A year on now and the ex-officer has recounted her testimony stating that “fear not racism” incited her actions. Leaves one wondering – fear of what?

“This is not about hate she testified in court on Friday, it’s about being scared.

After the jury convicted her of murder on Tuesday prosecutors unveiled text messages that revealed the 31-year old sent several offensive text messages, made jokes about Martin Luther King Jr. and made mockery of her black colleagues at work, she even discussed a do that her friend warn “may be racist.”

“It’s okay.. I’m the same,” Guyger wrote back about the dog, just days before she fatally shot 26-year-old Botham Jean in his Dallas apartment on Sept. 6, 2018. One minute later, she texted again: “I hate everything and everyone but y’all.”

Prosecutors will use the text messages, her disciplinary record as a police officer and her social media posts to argue for a harsher sentence, she may be looking at 5 to life imprisonment without the option of parole.

The defense claim did little to sway the juror who reached a guilty verdict on Tuesday after 5 hours of deliberation around 10:45am.

“Damn I was at this area with 5 different black officers !!!” Rivera texted Guyger on March 9, 2018. “Not racist but damn.” – This is one of several texts in which Guyger mocks her black colleagues. Guyger echoed Rivera and added: “Not racist but just have a different way of working and it shows.”

“When does this end lol,” read a text sent to Guyger. She replied: “When MLK is dead … oh wait …”  – This was a text sent by Guyger during the 2018 edition of the Martin Luther King Jr. parade. She texted another officer complaining about their long shift that day.

Prosecutors also showed images of Pinterest posts about guns and violence that Guyger had saved and commented on. One post showed a photo of a “Minion” character from the “Despicable Me” movies with the caption: “People are so ungrateful. No one ever thanks me for having the patience not to kill them.” Guyger commented about owning a gun on another meme that read, “I wear all black to remind you not to mess with me because I’m already dressed for your funeral.”

When Guyger’s former supervisor, Dallas Police Sgt. Robert Watson took to the stand, he said he thought the accused had been a dependable officer but cited one occasion when she allowed an hand-cuffed suspect escape her grasp. 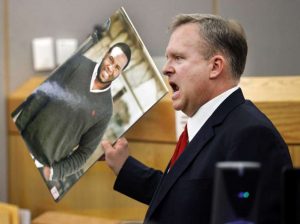 Allison Jean took stand and with tears she remembered her son in her witness. She explained how she thought Botham had been the glue of the family and how close they all were as a family and what pain the family was plunged into when their son and the 27 year old of Harding University was violently taken from them and her hopes for her son was dashed.

“I always refer to him as the glue of my three kids,” she said.
Prosecutors played videos of Botham Jean singing at a worship service while his older sister, Allisa Findley, sat on the stand, the Dallas Morning News reported.

“My life has not been the same,” she said. “It has just been like a roller coaster. I cannot sleep; I cannot eat. It’s just been the most terrible time for me. I almost am not able to work, but I just try to busy myself just to see if it will get out of my head. But it’s been very, very, very difficult.”

She told the court she had been sick often. She said she worried her youngest son was not coping with his brother’s death.
“I have to try to keep the family together because everybody is in pain,” she said. “We had a very, very close family.”

30 years after, train freight services begin from Warri to Itakpe