Davido Reacts As DSS Attempts To Re-arrest Sowore In Court

Popular Nigerian Musician, Davido has condemned the move by the operatives of the Department of State Services (DSS) to rearrest

Omoyele Sowore and his Co-defendant Olawale Bakare in the court room today.

Davido wrote: “Justice slowly becoming a thing of the past n our dear country …. a kid somewhere in Nigeria dreaming of becoming a

lawyer and bettering the community would see this and start having doubts … just sad.” in his reaction to a video of Sowore being held 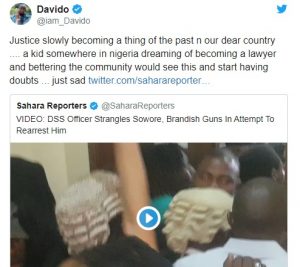