Davido’s Lawyer, Prince Reacts To Chioma Blocking Him On Instagram

Davido’s lawyer, Prince has reacted after the singer’s fiancée, Chioma reportedly blocked him on Instagram.

While responding to a Q & A session on his personal Instagram page. A fan asked him why Chioma blocked him on instagram.

Prince, who admitted that Chioma has repeatedly blocked him on Instagram, stated that he doesn’t know why she took the recent decision but hope to find out soon.

Prince also debunked rumor of being gay or bisexual by stating that he wouldn’t have married if he was one. He added that he is very comfortable in himself to hide or be worried about what someone thinks about his sexuality. 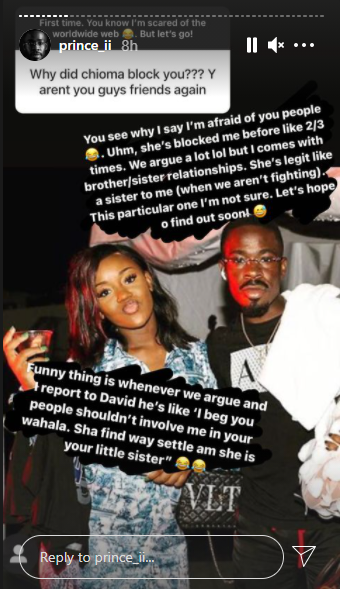