A group of persons, mainly deaf and dumb, on Monday, carried out a peaceful protest around Oyo state government house.

They reacted against what they called “illegal acquisition of 20 acres from 39 acres of their land by the Oyo State government”.

Mr.Silas Ike who is the National Chairman of the Board of Trustees (BoT) of Christian Mission for The Deaf, led the protest.

According to the chairman, ‘’ The mission bought 39 acres of land on the Lagos-Ibadan Expressway in 2004 with a plan to build the first special university for the deaf and dumb in the country and Africa on it’’.

The protesters demand to retrieve their land back from the state government, adding that they need more than 39 acres of land for the proposed university. 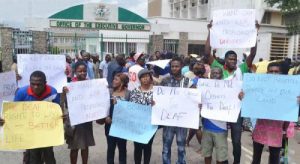 They carried placards with different inscriptions which read in part: ‘’Please, do not oppress the deaf’’, ‘’The deaf have rights to better life’’, ‘’We bought our land with public donations’’, ‘’Don not resettle people on our land’’. They lamented.

However, the Oyo State Commissioner for Land and Housing, Mr. Isaac Omodewu, in his address assured them that he will inform the governor who was away from the state, regarding the matter.

He also promised that a meeting would be scheduled with their representatives the following week.

In his reaction, the leader of the protesters, Mr. Ike expressed hope that someone is listening to their grievances.

#PoliceReformBill: 7 Things You Need to Know About the Bill