The singer turned entrepreneur is known for her skin whitening product, Whitenicious and there are rumors she is currently dating the world’s highest earning footballer, Paul Pogba.

The last time we heard about Dencia was when revelations of her sex romp with boyfriend Pogba came out.

This time, Dencia has been seen rocking the red carpet at the Latin Grammy awards, rocking some sort of metallic ensemble. 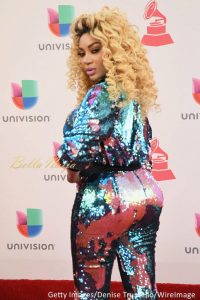 She is a known exhibitionist and her dressing yesterday is considered modest, compared to the usual Dencia. She also seems to have added weight.

Dencia attributed her weight gain to her recent diet. She said she has been eating mainly cakes for the past two months.

Maybe cake is not the only thing putting flesh on Dencia. Who knows, a little Paul or Dencia might be on the way!

Dalung: Nigeria is too Hungry to go to World Cup

Celebrity gospel singer dumps girlfriend for sleeping with her boss