‘He is digraceful, an embarassment’ – Governor Nyako slammed by Presidency 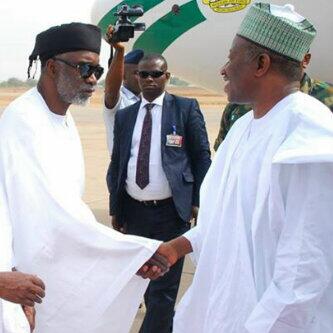 Adamawa State Governor Murtala Nyako has been blasted by the Presidency over comments he made capable of heating up the polity.

Nyako in an open letter to the Northern Governors Forum had accused the President Goodluck Jonathan administration of being “evil-minded” in leadership and responsible for the “advancement of corruption” in the country.

Nyako in his letter said the kidnappers of the innocent school girls recently abducted in Chibok, and other perpetrators of murder and mayhem in the North must have Federal assistance.

The Governor said, “Clearly the victims of the Administration’s evil-mindedness are substantially Northern Nigerians. The administration is bent on
bringing wars in the North between Muslim and Christians and within them and between one ethnic group and another or others in various communities in the region. Cases of mass murders by its bloody minded killers and cut-throats are well known, but it attributes the killings to so-called Boko-Haram.

“Thousands of our young girls and boys have been kidnapped by clearly organised militia in the last few years and kidnapping is now a random affair all over the far North. These organized kidnappers must have the backing of the Federal administration for
them to move about freely with abducted children just as those who convey ammunitions and explosives from the Ports to the safe-houses of so called Boko-Haram in the North.”

In his reaction, the Senior Special Assistant to the President on Public Affairs, Dr. Doyin Okupe issued a statement calling Governor Nyako a “pathetic embarassment.”

The statement read, “Governor Nyako claims that President Goodluck Jonathan is from the Eastern region which, according to him, is responsible for the killing of Northern political elites on the 15th of January 1966

“This is a very disgraceful remark by the governor and a pathetic embarrassment to the Nigerian Military from where Nyako derives his career antecedents. It is certainly a reflection of the governor’s  ignorance and unpatriotic inclinations.

“Similarly, the Adamawa State Governor referred to the Boko Haram terrorist group as a ‘phantom organisation’ which he believes does not exist! How hypocritical!?

“In his unwise and desperate attempt to demonise the Federal Government, Governor Nyako likened the military operations against insurgents to the activities of German dictator, Adolf Hitler!

“He therefore invited his colleague northern governors to join him to sue the Federal Government. This definitely defies common sense and portrays Mr. Nyako as unfit for the hallowed position of a state governor.”

“It is obvious that Governor Nyako’s opposition to the declaration of a state of emergency in three affected states of the North East as well as his repeated calls for the withdrawal of the Military from troubled states without any credible alternative or security road map, is an open endorsement of the activities of the insurgents which is meant to provide them unrestricted opportunity to further unleash terror on innocent citizens in order to precipitate chaos, further instability, mayhem and anarchy; a situation which they intend to exploit to undermine the administration and truncate our growing democracy. This, Nigerians will surely not allow to happen.”