House of Representatives speaker, Mr, Yakubu Dogara, has encouraged members of the house to speed up the process of passing the 2019 Appropriation Bill.

He mentioned the need for the acceleration while speaking in today’s plenary session.

Dogara stated, “We must realize that the remaining period demands of us to work assiduously and expeditiously so that we can dispose of the huge legislative assignment that still lies ahead of us.

“This would enable the house to sustain to the very last day the unsurpassed record of legislative outputs so far achieved thus, finishing as strongly as we started.

“The 2019 Appropriation Bill remains the major assignment the house has to discharge as quickly as possible so that government business will not be impeded.” 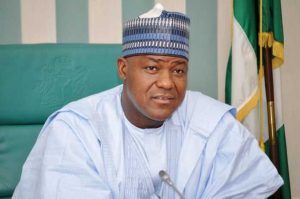 The speaker equally explained the need to retrace how the 8th National Assembly began in June 2015, as it is gradually moving towards its end. He emphasized, “we can corporately beat our chest that we have done appreciably well as a house.”

Dogara further reiterated the importance to quickly conclude all the legislative procedures the bill has to pass through as that will make things easier by the time the assembly closes in five months. He later urged that other bills that are also crucial to the development of the nation must be attended to in time.

. “We must resolve to conclude work on as many of these bills as possible for the advancement of the country and the well being of our people,” he urged.
Related: Reps step down 2019 Budget debate

APC Is For Poor People- Amaechi Claims During Campaign