Dortmund Finishes Ahead of Atletico Madrid in Group A

Dortmund’s  were able to defeat Monaco by two goals to nothing on Tuesday night in the Champions League. The Germans came into the game with two points behind Atletico Madrid. However, the result took them to 13 points, making them the unlikely leaders of the group. Atletico Madrid has the same number of points after they drew 0-0 with Club Brugge. Dortmund topped the group as a result of a better head-to-head record against the Spanish club. 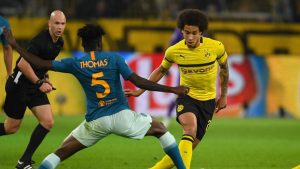 Raphael Guerreiro scored a brace for the  Germans. His first goal was a tap in that completed a counter-attack in the fifteenth minute of the match, while his second came two minutes to the end of the match. The Dortmund man curled a lovely shot into the roof of the net from about ten meters away from the goal post.

Dortmund put on a superb performance. They were without many of their regular starters but they proved to be too strong for the Burgges. Now, they have won 17 matches in total this season, four draws away from home, and just a single defeat.

Club Brugge finished third in the group and will join some other teams in the Europa, come January.

Related: Dortmund’s Batshuayi To Miss Rest Of Season With Injury

Sexual Violence Reporting App to be Launched in January