E! Cancels “I Am Cait” After 2 seasons

E! Entertainment have cancelled controversial show ‘I am Cait’ which chronicled the journey of Caitlyn Jenner as she navigated her new life as a woman.

Recall that the show which was being shown in Nigeria was cancelled due to complaints by Nigerian parents.

This sparked outrage in South Africa which was also affected by the decision of DSTV to cancel the show as E! has only one African channel which is shown in both nations.

Now, the network that started the show in the first place have now cancelled after 2 seasons.

There was no official reason given for the cancellation, but the controversial nature of the show and the low ratings may have been contributing factors for its cancellation.

Caitlyn Jenner herself confirmed the cancellation in a tweet thanking E! for the opportunity and also her co-stars on the show for all their support. 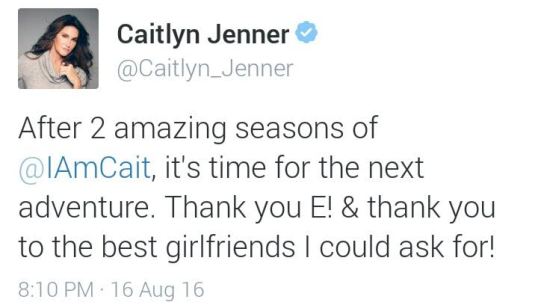