Ecobank CEO, Tanoh may step down amid regulator crackdown 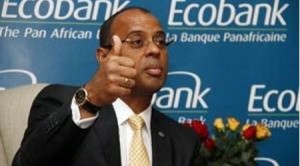 Tanoh may resign at an extraordinary shareholder meeting that Ecobank is holding on March 3 to adopt a plan for recommendations on corporate governance made by Nigeria’s Securities and Exchange Commission, New-York based DaMina said in an e-mailed note today. Four executives, led by Deputy Group CEO Albert Essien, wrote to interim chairman Andre Siaka on Feb. 11 requesting that Tanoh step down from the Lome, Togo-based lender, Reuters reported yesterday, citing internal e-mails.

“Tanoh has no sensible option but to quickly resign,” said Sebastian Spio-Garbrah, managing director at DaMina, a frontier-market risk adviser.

SEC investigated Ecobank after Laurence do Rego, the former group executive director of risk and finance, told the SEC in August that Tanoh and former Chairman Kolapo Lawson planned to sell assets below market value. Do Rego said she was pressured to write off debts owed by a business headed by Lawson and manipulate the bank’s results. Both Tanoh and Lawson deny any wrongdoing.

The agenda of next month’s shareholder meeting also includes a resolution on raising capital, reconstitution of the board and changes in articles of association regarding mergers and acquisitions. Tanoh’s departure would spur interest from investors, said Spio-Garbrah of DaMina.

“Hamstrung by a depressed capital markets valuation and recent governance issues, the pan-African bank may see activist funds and large private equity firms swoop in for equity stakes after Tanoh’s exit,” he said.

The SEC review of Ecobank found “inadequate transparency in the recruitment procedures and mechanisms for board members and executive staff,” the Abuja-based regulator said Jan. 10. It asked Ecobank to appoint a “substantive” chairman and develop a one-year plan to address the governance issues.

Founded in 1985, Ecobank operates in 35 Africa countries and France, and also has representative offices in Beijing, Dubai and London. The bank had $21.5 billion in assets at the end of September.

FBN Holdings increase by 56.65% within 6 months