One professor Adewole Ateere, the former HOD of the Department of Criminology at the Federal University of Oye-Ekiti allegedly impregnated a 16-year old student of the institution and attempted to use the young girl’s boyfriend as his cover.

According to reports, the teenager, Azuka, was wooed by the professor after another lecturer identified as Dr. Chinedu Abrifor convinced her about being old enough to have a romantic relationship.

Azuka, in her confession then explained how the professor would pick her up from her hostel have sex with her in his place.

She stated, “A few days after Dr. Abrifor approached me, he accompanied Prof. Atere to my hostel and they took me to their house at Aiyegbaju where I spent the night. I was returned to the hostel by 6 a.m. the following day. This practice continued for weeks.”

Meanwhile, her boyfriend, Kayode, Fasanya, ended their relationship at the time, after discovering that she was cheating on him with the professor.

Two months after, she became pregnant, marking the beginning of her rather negative experiences. 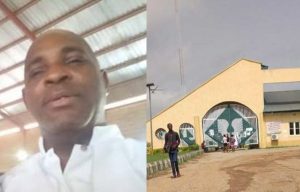 Azuka continued, “I opted for abortion instantly but a doctor I saw said he doesn’t do it. So, when I got to the hostel, I took Lipton tea and lime which made me experience serious blood flow. When I didn’t see my menstruation the following months, I didn’t bother. I thought it had cleared,” she told the investigating team.

“The laboratory official introduced me to Dr. Dada who eventually helped me out on Wednesday, July 26.”

Things became worse after the doctor mentioned that Dilation and curettage could not be done for her again as she was already 21 weeks into the pregnancy. However, he offered induced labour.

Azuka was later rushed to the hospital the next day after some cleaners found her in serious pain in the hostel.

According to a source in the university, “It was a Thursday morning and most of the students in the hostel had left for lectures. So it was easy to identify which room still had its occupant around. That was how Azuka was found in the room writhing in pain. She had lost so much blood that she could hardly talk.”

The professor has since resigned from his job in the school after he and his subordinates failed to make Kayode cover-up for his atrocities.

Ransom: Kagara schoolchildren’s abductors threaten to starve them to death