The Babajide Sanwo-Olu administration in Lagos State has come under fire for alleged harassment of ride-hailing companies Uber and Bolt (formerly Taxify) to pave way for a new ride-hailing service.

About a month after it restricted Okada operations in 15 local councils in the state and on major highways and bridges, negatively affecting bike-hailing firms like MAX, Gokada and ORide, the state government proposed a plan to regulate the activities of ride-hailing firms.

According to new regulations proposed by the government, from March 1, 2020, drivers on these platforms were expected to have a Lagos State Drivers’ Institute (LASDRI) card and a driver badge issued by the Department of Public Transport and Commuter Services of the Lagos State Ministry of Transport.

In addition to these, vehicles on ride-hailing platforms must possess hackney permits issued by the Lagos State Motor Vehicle Administration Agency and must be fitted with a corresponding tag.

While some of these requirements – such as the hackney permit – are not new, many commentators state that their enforcement at this time suggests a clandestine move to force the existing ride-hailing companies out of business to pave way for another.

Ekocab Nigeria is a ride-hailing company which recently partnered the Lagos State Government to launch ekocab, a taxi-hailing service that will connect regular yellow taxi drivers with commuters in the state.

The company was purportedly founded in 2017  by two young men – Nathaniel Gideon and Segun Cole; although not much is known about their pedigree other than signing a partnership with the Lagos State Taxi and Cab Operators Association in 2019 to onboard thousands of yellow commercial taxies on its platform, Techpoint reported. The company in a release says it also plans to bring owners of unbranded cars onboard, although it did not specify when.

Many commentators on social media have accused the government of trying to muscle out other ride-hailing platforms to pave way for an ekocab monopoly.

According to these commentators, ekocab is a good idea but it should exist alongside others so that constant competition can improve their services.

Also, some commuters complained about the rudeness and stubbornness of some of the yellow-taxi drivers, as well as the poor state of the vehicles used as yellow taxis.

This Present Lagos Governor Has Nothing To Offer Lagosians.
So Because Of #EkoCab He Wants To BAN @UberNigeria and @Boltapp_ng ?

What A Draconian Act.
Does He Want To Monopolize Transportation In Lagos State?
The Brt System They're Managing How Far??
Why Must Lagos Do This??

Lagos allowed Uber, Taxify, Gokada, OPay to test run their ideas only for them to copy it. EkoCab is here, I won't be surprised to see EkoKada.

This is the reason why they want to kill UBER & BOLT. They seek to replace those clean air-conditioned cars with these old vehicles so they can empower their partners in election rigging called NURTW pic.twitter.com/S0ECb888H9

Where's that thread that said Ekocab is not for LASG again?

Whoever came up with the idea of EkoCab with those outdated vehicles has a mental problem.

And by outstandingly overwhelming records, only the Nigerian government makes such retarded decision.

So the plan to "enable the Association bridge the gap created by the Okada/Tricycle restrictions" is to digitize the yellow taxis?

You think people who could only afford Bikes to their inner streets will suddenly be able to order Ekocab to carry Ugwu??? https://t.co/qtuMtXRLNn

I’ve been waiting for this part. If we are being sincere, ekocab can’t bridge the gap that the kekes and bikes created. It will be too expensive for people to use on a day to day basis. https://t.co/PJEYIjgPOM

So yes, EkoCab has the hand of LASG in it.

Actually, the way Lagos APC e-rats have gone on overdrive to defend EkoCab is all the evidence I need to know LASG has a hand in it. 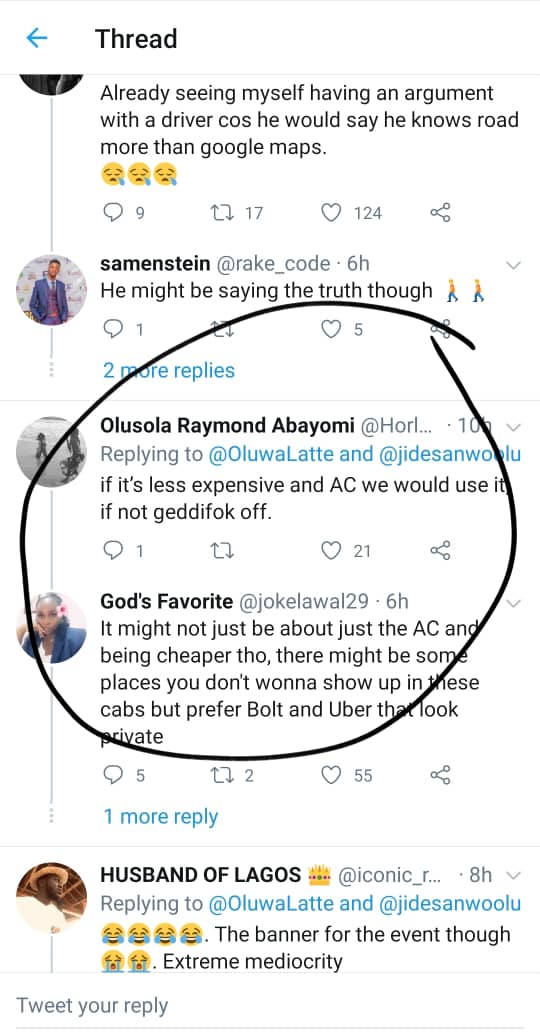 So, before BOS became Lagos state governor, my team shared a proposal with his team on this #EkoCab in 2018, apparently my guys didn't know this was out. I just shared with them now and I can't stop laughing. Everyone is livid. 😂😂😂😂 pic.twitter.com/8Ly16QWFCH

@jidesanwoolu decided to clamp down on Uber and Taxify.

Because they wanted to reintroduce and digitalize these yellow cabs. Pls let's rate it 1 Star on Playstore!

Coachella 2020 Postponed Due To Coronavirus Fears