Tesla CEO, Elon Musk might be re-thinking about his decision to endorse his long time friend, Kanye West’s presidential bid.

Earlier on, Kanye West announced that he’s running for president with the “full support” of his close friend, Elon Musk.

However, after Kanye West’s interview with Forbes, it seems Elon Musk is re-thinking his support for Kanye.

During Kanye West’s interview with Forbes, he revealed that he has never voted in his life, he also plans to run the White House like Wakanda and believes vaccines are “the mark of the beast”

In the same interview, Kanye West said he no longer supports President Trump and also condemned the Democratic Party.

“That is a form of racism and white supremacy and white control to say that all Black people need to be Democrat and to assume that me running is me splitting the vote. All of that information is being charged up on social media platforms by Democrats.

“And Democrats used to tell me, the same Democrats have threatened me … The reason why this is the first day I registered to vote is because I was scared. I was told that if I voted on Trump my music career would be over. I was threatened into being in one party.

“I was threatened as a Black man into the Democratic Party. And that’s what the Democrats are doing, emotionally, to my people. Threatening them to the point where this white man can tell a Black man if you don’t vote for me, you’re not Black,” he said.

A Twitter user, John Crowley responded to Musk’s original tweet with a link to the story, writing, “Cmon Elon – you’re way too intelligent for this BS.”

Elon Musk reacting to the tweet, replied: “We may have more differences of opinion than I anticipated.” 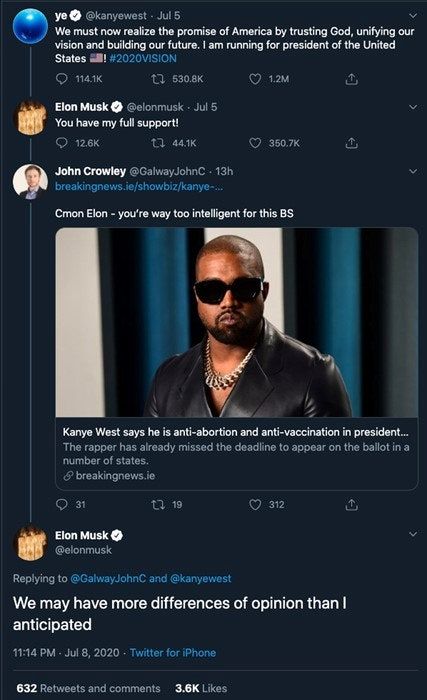 However, the Tesla CEO has deleted the tweet from his page.