Elon Musk broke the silence on the ATV on Sunday tweeting that the company will aim to “have it come out same time as truck.” It’ll be a

two-seater, and designed to work with Cybertruck. 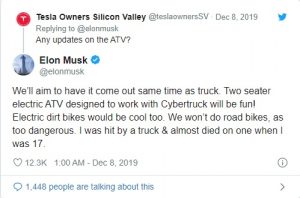 The ATV will be offered as an optional accessory with the Cybertruck, Musk tweeted later. Tesla has trademarked the name Cyberquad for

Tesla hasn’t released any other information about the ATV, such as its price, performance figures or its expected range.

The Tesla Cybertruck is expected to arrive late 2021, so we would probably see the Tesla Cyberquad around that time. Musk’s Sunday

the question, as they’re “too dangerous.”

He said, “Electric dirt bikes would be cool too, We won’t do road bikes, as too dangerous. I was hit by a truck & almost died on one when I

Pros and cons of dating on Omegle chat and its alternatives

Warren Buffet Resigns from Bill and Melinda Gates Foundation, Donated Half His…