EndSARS: Shame on You If You’ve Condemned My Interventions In The Protests – Nnamdi Kanu

The Head of Indigenous People of Biafra (IPOB), Mazi Nnamdi Kanu, has burst out in outrage against those who have been down-talking his social media actions since the beginning of the #EndSars protests.

Kanu on Wednesday, tweeted that Southern Nigerians should not tolerate a Muslim using the army to kill unarmed southern protesters.

However following series of backlash for his perceived role in encouraging the counterattacks as a result of the shootings and killings of #EndSars protesters, Kanu slammed his critics, saying they should be ashamed of themselves.

He tweeted on Thursday, “You should be ASHAMED of yourself if you’re amongst those CONDEMNING my interventions in the #EndSARS protest, especially that my interventions will endanger #Ndigbo”.

“You’re WRONG! Ndigbo & #IPOB (like EVERYONE else) have a RIGHT to participate in these protests. Get used to it!”, he added.

Igbo group, Ohanaeze Ndigbo on Wednesday, declared that their hands were washed clean of any statements credited to Kanu encouraging Igbos to attack the governor of Abia state, Okezie Ikpeazu.

In the released statement, young adults of Ohafia area in Abia state were told to “capture” Abia State Governor, Okezie Ikpeazu and make him face trial for the alleged ”role he played in the killing of #ENDSARS protesters in the state”.

Part of the statement reads, “Okezie Ikpeazu is in Asaga village Ohafia. He is hiding in the house of his Chief of Staff, one Ukpai Agwu Ukpai.

“Our youths in Ohafia are hereby instructed to capture him alive to face trial for the numerous murders he committed including the death of protesters yesterday (Tuesday) in Aba. On no account must he be allowed to leave Ohafia alive. Its an order. “

In the statement, Kanu also urged the #EndSARS protesters to keep up faith, including that “the oppressors will try every option including shooting to quell the protest, but nobody should be deterred”.

He further added “We call on every youth, man and woman to join the protests now. This is the time everybody should identify with this movement  to rescue our collective future and destiny from suffocation.”

Find his tweets below. 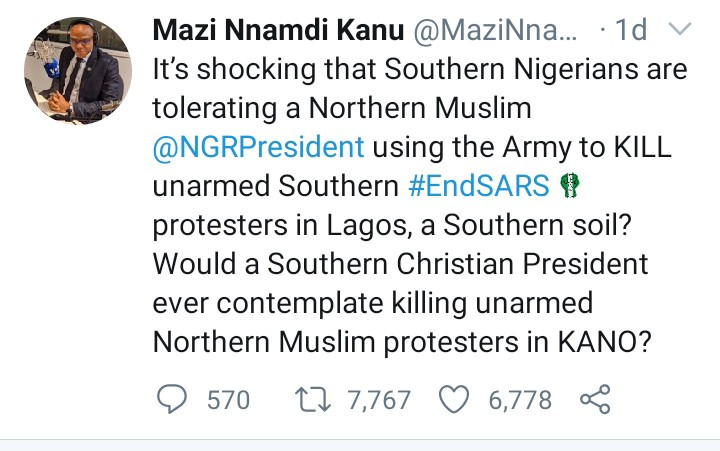 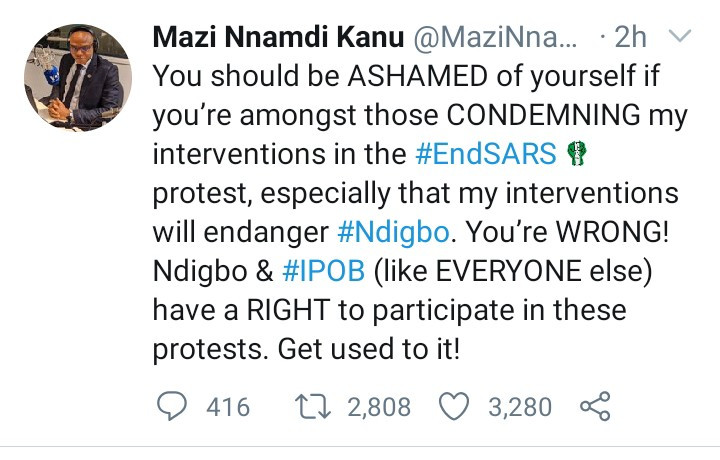 Buhari breaks silence: EndSARS Protesters Mistook Our Compliance With Their Demands For Weakness

Chad’s President Dies In Clash With Rebels, Son Takes Over