An unprecedently seismic youth-led force is convulsing the foundations of Nigeria, which once and for all settles the widespread notion that Nigeria’s youth are lazy, ignorant, and detached. I call this the EndSWAT/EndSARS youth steamroller.

Like the literal steamroller, this Nigerian youth steamroller is massive, resolute, persistent, fearless, implacable, and determined to crush everything and everyone that stands in its way. Its momentous passion is energized by the vigorous eruption of years of raw, pent-up rage over the murderous impunity and crippling incompetence of the Nigerian state. 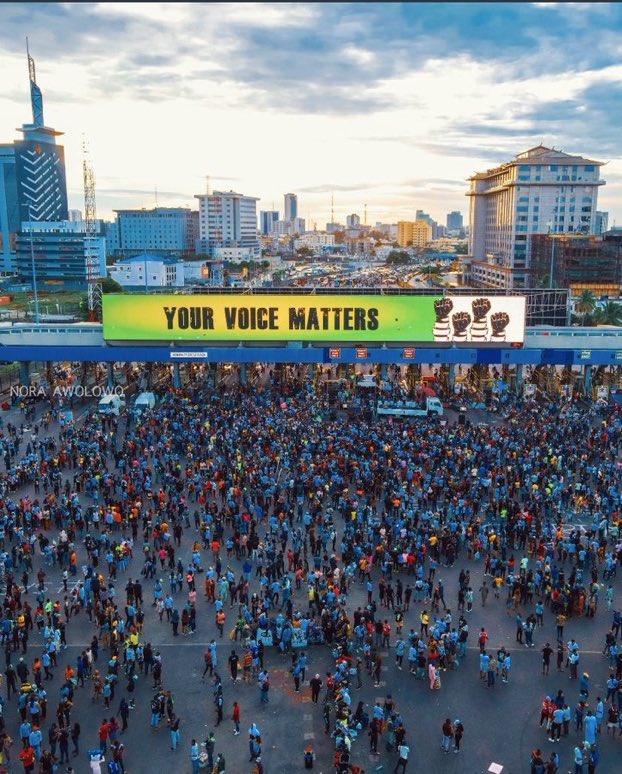 Its confidence is buoyed by its lack of fear of loss because it has nothing to lose. The vast majority of young Nigerians feel indestructible because they have already been destroyed. You can’t destroy what is already destroyed.

When a young man pays through his nose to get a crummy higher education that was perpetually punctuated by strikes and, after graduation, is required to pay hundreds of thousands, sometimes millions, in bribes to get a hopelessly low-wage civil service job, he has nothing to lose by confronting the state.

When a man defies the odds, surmounts the state-imposed structural impediments placed in his way, and takes advantage of the global digital economy to earn a decent living but automatically becomes the target of ignorant law enforcement agents who torture him based on evidence-free suspicion that he is an internet fraudster, he has nothing to lose by fighting.

When a smart, hardworking young lady with as good qualifications as—or even better than—the next person can’t get a job without being trapped in the lecherous snares of arrogant and degenerate bureaucrats and politicians, she has nothing to lose by fighting.

When the annihilators of the Nigerian state transcend the dysfunctions that they created at home by misappropriating public resources to go abroad for services their incompetence deprives the less privileged of, they enkindle the fury of young people who are condemned to deal with the insensate cruelty of the elites.

Young people see that the elites send their children to overseas schools while public institutions wither away irreparably. They see that as healthcare gets progressively worse, the elites have become perpetual patrons of foreign hospitals.

They see insatiably greedy, short-sighted, senescent geezers in government relentlessly borrowing and stealing massive amounts of foreign loans they won’t be around to repay. They know they would be burdened with and compelled to repay these foreign debts they didn’t benefit from. They know their futures are being literally mortgaged. So they have nothing to lose by fighting.

In a January 21, 2012 column titled “Labor’s Treachery against the ‘Occupy Nigeria’ Revolt,” I despaired that the revolutionary fire of a splendidly promising, spontaneous, unscripted, and unexampled mass insurrection against an evil ruling class was extinguished by Nigeria’s thoroughly compromised labor movement.

I ended the column with the following ominous warning: “Lastly, this battle isn’t over yet.  The suicidal and clueless Nigerian elite are unlikely to relent in their cowardly and egomaniacal violations of the poor. When the combustion does erupt again, it would take a decidedly different course. Labor leaders would no longer be able to stop what they didn’t start. A wise government would learn from this, retrace its steps, and respect the will and wishes of the people it claims to govern. But is any Nigerian government wise?”

My warning turned out to be accurate. The current #EndSARs/#EndSWAT revolt is a recrudescence of the 2012 #OccupyNigeria protests that the Nigerian labor movement betrayed and squelched from within. As I predicted, the current face of the revolt of the Nigerian youth excludes labor and the traditional wheeler-dealing “pro-democracy” and “human rights” entrepreneurs. It is fierce, decentered, leaderless and yet intensely consequential.

As I pointed out on social media recently, the current #EndSARS/#EndSWAT revolutionary ferment in Nigeria has been successful precisely because the Nigerian Labor Congress and its evil twin, the Trade Union Congress, aren’t in it.

The debauched labor aristocrats in NLC and TUC habitually hijack, neutralize, and extinguish the people’s revolt. They didn’t just do precisely that in the #OccupyNigeriaProtests in 2012, they’ve been doing it ever since. They did it again a few weeks ago. There is now no doubt that the Nigerian labor movement is officially an extension of the government.

But why are young people now waking up? The seeming complacence and self-satisfaction of the Nigerian youth in the face of their continual rape by a rapacious, decaying elite class—and their curious obsession with sports and entertainment—had worried me and caused me to question my confidence that a second OccupyNigeria rebellion in a newer, more ferocious, less predictable form would materialize someday.

In trying to understand why the Nigerian youth appeared disengaged, “ignorant,” fixated on strategies of emotional escape such as binge-watching BBNaija but suddenly energized to confront their oppressors, I encountered a concept in economics called “rational ignorance.”

In his book titled “Against Democracy,” Jason Brennan explained rational ignorance as the intentional avoidance of knowledge that has no immediate utilitarian value. “When the expected costs of acquiring information of a particular sort exceed the expected benefits of possessing that sort of information, people will usually not bother to acquire the information,” he wrote.

Nigerian politics is a source of unrewarding emotional strife and distress, so the youth chose to disengage from it, not because they don’t understand the power of knowledge and engagement but because they realize that they are and will always be systematically excluded from the orbit of power and influence. They also realize that conventional engagement with the state would do nothing to assuage their continued structural exclusion.

Now they’ve come to the realization that their very lives depend on their unconventional engagement with the state. Malcolm X once said, “Preserve your life. It’s the best thing you’ve got. And if you gotta give it up, let it be even Steven.”

The Nigerian youth are fighting back with vigor and defiance because it’s their only chance to live. They are suddenly engaged because they are enraged. The only thing they have to lose is their oppression. That’s not a loss anyone regrets. The political elites should be wise enough to know that they can’t crush a people whose only hope of living is to risk death.

In Monarchs and Mendicants, Dan Groat said, “Not interested in scarin’ anybody, but people with good sense are afraid of a man with nothin’ to lose.” Lance Conrad captured the same sentiment in The Price of Nobility. He said, “Only a fool would underestimate a man with nothing to lose.”

The #EndSWAT/#EndSARS are only the trigger of a much deeper youth resentment against the Nigerian state. The protests aren’t just against police brutality; they are also against the oppressive and obscenely unequal character of the Nigerian society.

Although I live in America, my heart is with the valiant and resilient young men and women who are risking everything to take back their humanity from wretched scoundrels in the seat of power.

*Kperogi is a US-based Nigerian academic and columnist with Nigerian Tribune.

#EndSARS: We will not allow anarchy in Nigeria – FG

We need a plan B – Protesters re-strategize following curfew in Lagos, Edo…