A Black University professor by the name, Johnny E. Williams, has made somewhat unsavory comments about the white race, calling them “inhuman a**holes,” and wishing they would “f**king die.”

The professor took his Twitter account to vent his anger and frustration at the alleged white domination, issuing a challenge that the oppressed races rise up and overthrow white tyranny. 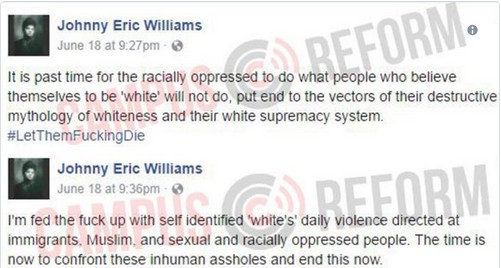 The Trinity college professor, who has authored the books; African-American Religion and the Civil Rights Movement in Arkansas and Decoding Racial Ideology in Genomics and is the author of the upcoming The Persistence of White Sociology, was voicing an opinion that is reminiscent of comments he has made before.

Considering he has history of making such comments, its not surprising that he also happens to not only be anti-white but anti-semitic as well.

According to the DailyWire.com, he had made his stance known while speaking at a forum in 2015.

He said; “To accomplish our movement’s objectives we understand we cannot secure our human rights until all people are free of systemic oppression.”

“For this reason the Black Lives Matter movement seeks common cause with other oppressed people. The centrality of ‘race’ is important for the movement but so too is centering gender, sexuality, class, militarism, and the experiences of oppression.”

“To struggle against systemic racism without fighting to rid the world of sexism, heteronormativity, economic exploitation and domination is viewed by the movement as a piecemeal intervention that will not effectively dismantle white supremacy and its associated systems of oppressions.”

“It does not escape Black Lives Matter participants that state violence techniques used by Israel to control and occupy Palestine are also being deployed against us. We are very much aware that police in the U.S. are receiving training from the Israelis on how to dehumanize and control us as “others” in order to shut down our dissent.”

“Palestinians drew the connection too and sent solidarity messages to Ferguson protestors via social media advising them how to counter the effects of tear gas. One especially illuminating tweet read: #Ferguson: “The tear gas used against you was probably tested on us first by Israel. No worries, Stay Strong.”

… Unlike Ashkenazi Jews and ‘white’ Euro-Americans, Palestinians and blacks face police in full battle gear, ready to unleash their massive firepower on them. During the early stages of the Ferguson uprising a protestor, in the face of an overwhelming show of police force, yelled out, “You gonna shoot us? Is this the Gaza Strip?”

Trump reveals only condition to leave White House for Biden

Trump or Biden, Russia ready to work with any US leader – Putin