Governor Nasir El-Rufai’s rising stock on the Nigerian political scene took a massive dent after he was caught lying about his state’s 2016 WAEC performance.

The Kaduna State Governor tweeted that his state emerged 1st in the North and 4th nationwide, in last year’s WAEC examinations.

Last year, Kaduna came 1st in the North and 4th in the whole country in both WAEC and NECO. We are working towards being 1st in Nigeria. pic.twitter.com/eqDezQ5yDu

Twitter users were quick to bring out facts which showed something different from what the former FCT minister tweeted. 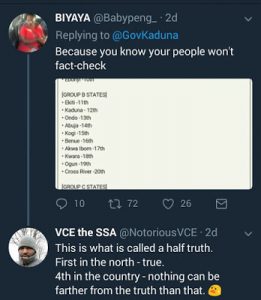 According to the facts, El-Rufai was right about Kaduna State being the no.1 state however he was wrong with the nationwide information he gave.

Rivers State were 4th on the nationwide rankings while Kaduna State finished in a distant 12th position.

Social media space is an unforgiving one and Governor Nasir El-Rufai would have learnt one or two things about getting facts right before sharing it publicly.

Here is the state-by-state rankings from top to bottom: 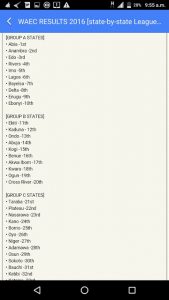 Yoruba republic will be achieved without violence – Akintoye

Edo 2020: Why I was moved to tears – Oshiomhole breaks silence on guber poll