Former Aviation Minister, Chief Femi Fani-Kayode has mocked outgoing Governor of Imo State, Owelle Rochas Okorocha for boasting that he would become president no matter the level of distractions thrown his way.

Speaking on Sunday during his valedictory thanksgiving service held at the Government House Chapel in Owerri, the governor said, “I tell you, I am the most criticised person in Nigeria today. I don’t know why the entire elite hate me with cruelty.

“My Senate ambition is still a battle. More than 30 people have joined the suit to fight me. All these, I will overcome.

“They are only preparing me for the glory ahead.

“Mark it, I will be president of Nigeria. I said this on this altar so that the kingdom of God will rise against those fighting to stop me.

“Also, those who think they will put me in prison will go to prison before me.

“They don’t want me to be at the National Assembly, but I will be there. I know I am the last man standing, but I will not give up.”

Responding to the boast, Fani-Kayode compared Okorocha to a grown man that had chosen to wear “diapers”.

The controversial ex-minister added that Okorocha would never become president “as long as Jesus sits on the throne”.

Taking to his verified Twitter handle on Monday night, Fani-Kayode wrote: Mark my words, as long as Jesus sits on the throne you do not have a hope in hell of becoming President. Hell will freeze over first. 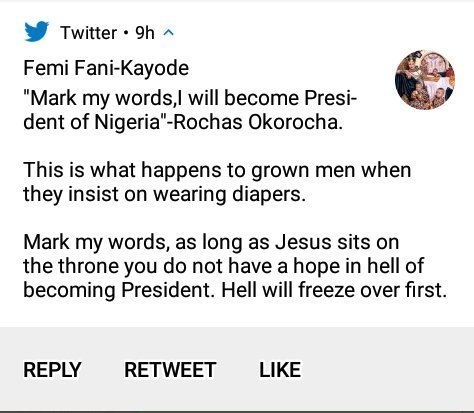 How 4 members of same family died mysteriously in Ebonyi