Former Aviation Minister, Chief Femi Fani-Kayode has reacted to the news making the rounds that a Southern Sudanese girl, Nyalong Ngong Deng, was auctioned by her father in exchange for 530 cows, three Toyota Land Cruisers and $10,000 cash.

Fani-Kayode described the act as “shameful and barbaric”. 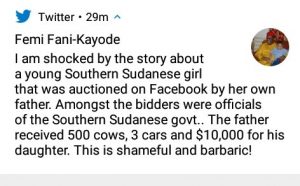 Although it is illegal for a girl to be married before the age of 18 in South Sudan, the 17-year-old Deng was auctioned off on Facebook to a wealthy businessman as his tenth wife.

While Facebook has since deleted the auction, the tech giant’s action came after the deed was already done.