Fans and Celebrities Blast Oprah Winfrey Over Comments On Trump

Media mogul and richest black woman in the United States of America, Oprah Winfrey is facing serious backlash from her fans and other celebrities, after she made a comment about Donald Trump on her Twitter page last Thursday.

Just like many American liberals and people of colour who had supported Hillary Clinton, Oprah had expressed shock, immediately Donald Trump won the American Presidential election. However, seeing Trump looking conciliatory and calm after victory, she had begun to soften her criticism of the President-elect.

At 9.00pm on Thursday, the talk show host tweeted a picture of Donald Trump meeting with President Obama at the White House, saying: ‘Everybody take a deep breath! Hope lives’ 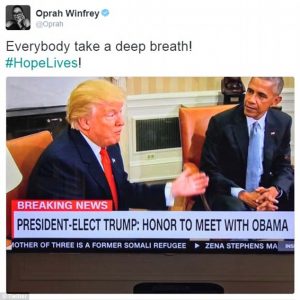 She further said: “I could sense, maybe I’m wrong, but I could sense from Donald Trump’s body language even when he came out for the acceptance speech, that brotha has been humbled by this world thing.”

Oprah’s comments were not received well online, as several people had taken to Twitter to express their disappointment in her new point of view. Many Winfrey followers responded to her comments, which were understood by several people as tone-deaf or condescending.

Celebrities who criticised her include, Scott Weinberg and John Early.

Woman Ends Her Marriage To Lecturer, Moves In With Her Bricklayer Lover