It’s “gbas gbos” season and I am reporting live from the “vawulence” HQ, Twitter NG. This gist is not for the weak, you have to walk with me.

The problem started when Ruger decided to host a QnA on his page, to connect with his fans yunno. When one of his fans decided to be unfortunate and compared the singer to Buju (now BNXN, but ain’t nobody tryna call him that), and Ruger responded with all the smoke he could muster. The man wasn’t having it! 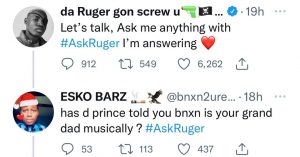 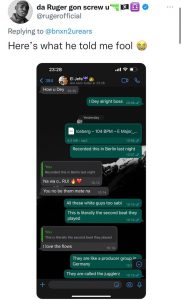 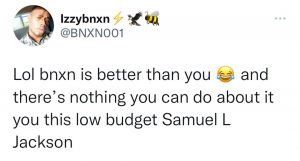 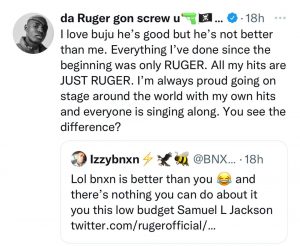 While the Ruger vs BNXN debate was ongoing, Blaqbonez decided to jump on Ruger’s tweet to catch cruise and got hit by another unfortunate fellow who referred to him as a “TikToker” in a bid to ratio him. Unfortunately, the ratio declined and Blaqbonez did not hesitate to send him back from whence he came with his tail between his legs. 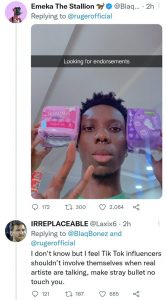 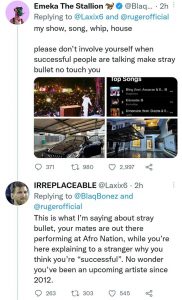 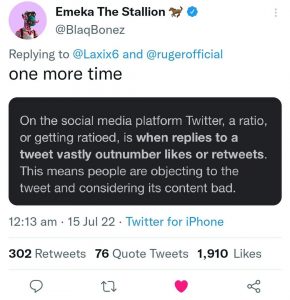 Meanwhile, Omah Lay decided to respond on behalf of Buju, seeing as the artiste can barely get anything done all by himself (This is not my opinion I’m just going with the flow). He called Ruger and Victony kids. 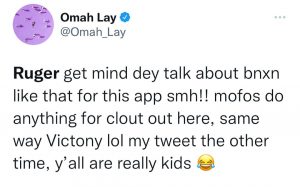 Victony went ahead to quote Omah Lay’s tweet with a response that implied that the artiste should promote his album and mind his own business. 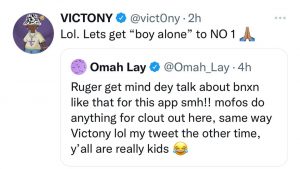 In what can only be described as a badly timed tweet, Laycon also tried to drop his 2 cents and complimented Buju, unfortunately, his tweet was misunderstood and thought to be an insult and the star subsequently got dragged left right and center across twitter by people who think it is not in his place to speak because he is not on their level.

Magixx got dragged into the “gbas gbos” fest when he tweeted “hmmmm” without context in the middle of the fracas. Unfortunately, tweeps weren’t having it and they began dragging him by his dreadlocks. He had their time though and he returned the favor on our beloved bald-headed influencer, Mbah. There was no hair to drag him by so I’m guessing he held on to his boxers. Another influencer came to Mbah’s rescue by telling Magixx not to misstep lest he ends up like Korede Bello but then his father received a stray bullet for his impunity. 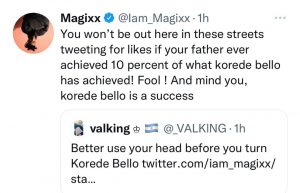 Amidst all the chaos, Buju whose single, “kilometer remix” featuring Zinoleesky, is currently playing in the background as I write this article, responded with a simple tweet without quoting anybody.

Tweeps believe that Wizkid is the only one who can settle this fight. 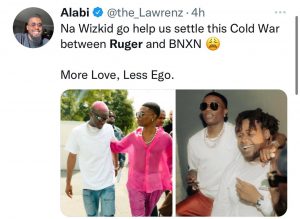