Female Fan Asks to Hang out With Nigerian Actor David Oyelowo, Check Out His Epic Reply

David Oyelowo, star of Hollywood movie, Gringo, is Nigerian born and has never been shy to admit it.

While on holiday in Paris, he posted a photo where he stood beside the Eiffel tower. The comments section of this post took on a very interesting look afterwards when a  female fan by the handle @bkhdeli claimed she is also and Paris and wished to hang out with the Selma actor for coffee.

David worried about how this might look responded by saying; “My wife would not approve, Enjoy Paris”

Another fan @kaygkolek added: @bkhdeli why bloody not tho if his wife approves. Pity she doesn’t ”

Not to be deterred, the female fan then said that her husband can be there with David and his wife Jessica. 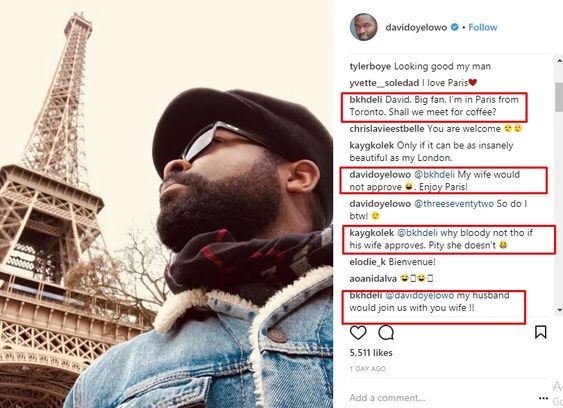 Former Rapper 2Shotz Reveals Why He Dumped Music for Photography