Suspected sex offender, R. Kelly is no longer behind bars. The Cook County Sheriff’s office, through its spokesperson, Sophia Ansari, stated that the popular R&B star posted $100,000 which amounts for just 10% of the total amount he was asked to pay on Saturday, following his arrest.

The $100,000 is said to have been paid by a 47 –year old woman simply identified as a “friend” of the artiste.  The 47-year-old woman, who is from the suburbs of Romeoville, Illinois, specifically indicated that she only wanted to be referred to as “friend”. 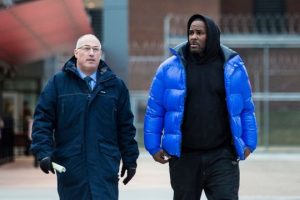 After the payment was made, R Kelly was subsequently spotted with his lawyer, Steve Greenberg as they stepped out the jail.

As part of his bail conditions, he was banned from being in contact with girls that are below the 18 years.

Although, the R Kelly has pleaded not guilty to all the 10 count charges of sexual abuse against him. His next hearing is on March 22.

Video: Dino Melaye sings,rejoices after his victory at the polls