Rio and Kate Ferdinand have revealed they are expecting a baby boy.

The former Towie star, 29, Took to her Instagram page on Wednesday to break the news as she shared pictures from a gender reveal party that took place at their home in Bromley. She wrote in her caption: ‘ it’s a boy. me and tia are outnumbered.’

The location of the event was not revealed however it was attended by close friends as well as family members of the couple who appeared excited for them.

As seen in one of the photos shared on Instagram, the reality star was hugging husband, 41, as her stepchildren, Lorenz, 14, Tate, 11, and nine-year-old Tia, cheered them on.

Happy Father’s Day to you @rioferdy5 💙 you are the best daddy to Lorenz, Tate & Tia ….(& Ronnie 😉). Can’t wait for our next chapter. Let’s celebrate you today 💙

‘It melts my heart how excited the children are, your such a good mummy already. What a beautiful family,’ an Instagram user commented.

While one added: ‘Look how happy the kids are.’ 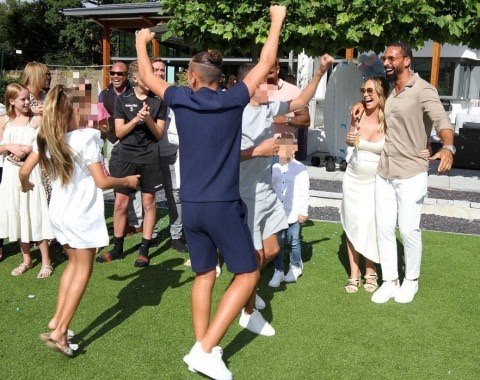 Kate and Rio Ferdinand tied the knot in an intimate ceremony in 2019, surrounded by their closest friends and family.

The former England International sadly lost his first wife, Rebecca, after she battled breast cancer five years ago – with the reality star becoming a step-mum to their three children. 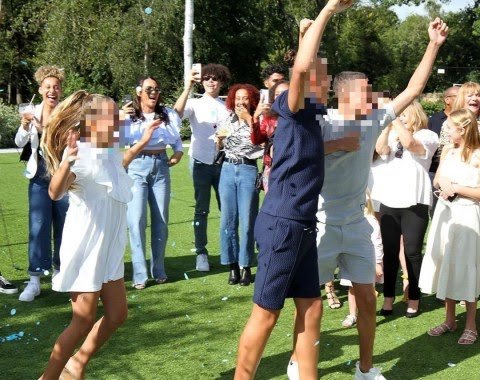 Three months ago, the couple announced they were set to welcome a little one of their own, posting a video of the moment they told Lorenz, Tia and Tate there would be a new addition in the house.

Kate has always been open about her wish for her own children, explaining she felt ‘ready’ to welcome a tot into the family.

And, while being a step-mum has prepared her for kids over the age of five, she admitted she was clueless in how to take care of a newborn.

‘I said to Rio say if we have a baby when they get to five I’m going to be great. I know what I’m doing but that baby stage I don’t know,’ she said.

‘The kids talk about having a baby all the time. I said “Rio I’ve never changed a nappy, I’ve never had children!”