A female job seeker, Iniobong Umoren, has reportedly gone missing in the course of meeting a man who claimed he could help her secure employment.

Her friend, Umoh Uduak, took to her Twitter handle @UmohUduak1 to make the revelation on Thursday.

According to Uduak, Iniobong had told her she was meeting the man, Uduak Frank Akpan, around the Ibiaku Junction on Airport Road in Uyo, Akwa Ibom State.

Uduak said that she advised Iniobong, whose Twitter handle is @HinyHumoren, to turn on the location on her mobile phone so that she could be easily traced in case of necessity.

She said she became apprehensive after she got a 1-second audio message on WhatsApp, in which Iniobong appeared to be crying for help.

Uduak, who is based in Lagos, said that she began to make frantic calls to her friend’s phone number but the calls went unanswered.

She said that efforts to contact the suspect, Akpan on the phone number with which he interacted with her friend were unsuccessful as he did not pick his calls throughout the day.

She appealed to the police, other security agencies and other Nigerians to help find her missing friend.

To cut everything short, she sent me a 1sec audio record on WhatsApp and I had to call her back to know if she wanted to say something to me but immediately I called her I heard her screaming.😭😭😭😭😭😭😭
Someone, please help her out

This was our last chat before she left for the interview 😭 pic.twitter.com/hJl7793LMz

However, Akpan on Friday took to Facebook to deny any knowledge of Iniobong’s disappearance.

He admitted that he fixed an appointment with the victim but the meeting never took place because she did not show up. 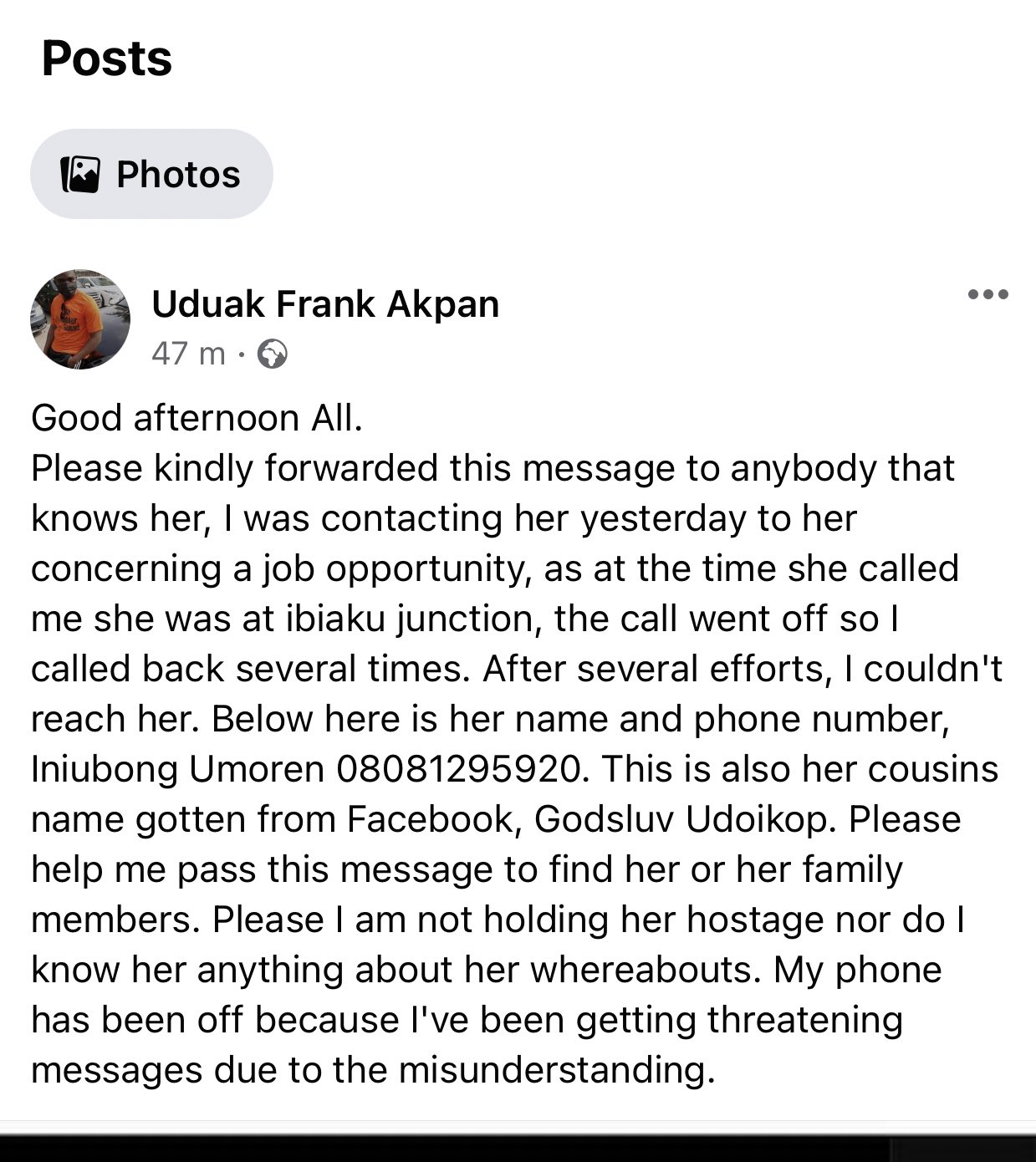 Meanwhile, the Nigeria Police Force has waded into the case.

A tweet from the verified handle of the police on Saturday read, “Anti-Kidnapping Squad of Akwa Ibom State Command is already investigating this case.

“As a matter of fact, two suspects have been arrested. Further updates will be provided as the investigation progresses.”

Iniobong has yet to be found as of press time, 10 am on Saturday, Uduak confirmed.

Davido Dragged By Angry Nigerians Over Birthday Message To Chioma