Obinwanne Okeke also known as Invictus Obi, once touted by Forbes as a billionaire under 30, is reportedly set to plead guilty to wire and computer fraud in the United States.

This comes nearly a year after Obinwanne was arrested by the FBI in August, 2019 and slammed with a two count charge of wire and computer fraud.

Invictus Obi who once graced the cover of Forbes Magazine, fought the charges but finally capitulated saying he would plead guilty for a lesser sentencing by the Judge. 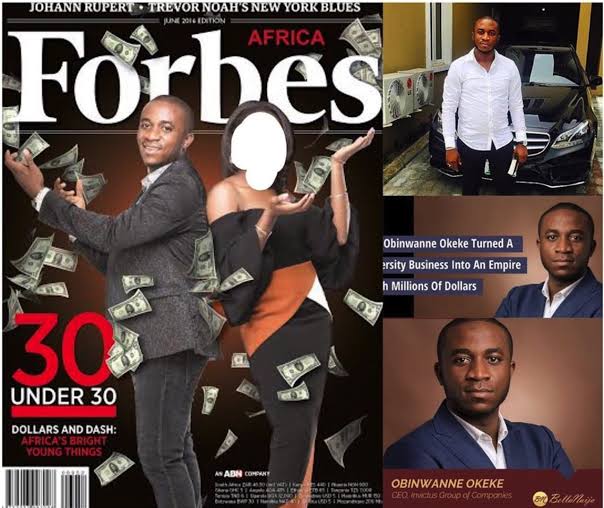 US District Judge, Rebecca Smith assented to the plea bargain by the Nigerian and issued an order on April 24 for arrangements to commence.

“The Court has been advised that the defendant wishes to enter a plea of guilty.

“A United States Magistrate Judge is hereby authorised, with the consent of the defendant, to conduct the proceedings required by the Federal Rule of Criminal Procedure 11 incident to the making of the plea. See 28 U.S.C. Section (b) (1); United States v. Dees, 125 F.3d 261 (5th Cir.1997).

“The defendant may consent to the United States Magistrate Judge conducting the proceedings on a form provided by the clerk.

“If, after conducting such proceedings, the Magistrate Judge accepts the plea of guilty and the associated plea agreement, a presentence investigation shall be conducted and a report shall be prepared pursuant to Federal Rule of Criminal Procedure 32, and a sentencing data shall be scheduled.

“If the plea of guilty is accepted, the District Judge will adjudicate guilt and will determine and impose a sentence.”

Prior to the plea bargain arrangement, Invictus Obi filed two objections to the charges in December of 2019 saying the FBI couldn’t charge him for fraud since the crime was not committed on United States soil and no American company was affected.

Obi also accused the FBI of obtaining evidence from him under duress which makes the information retrieved of no consequence to the case.

The FBI countered the objections saying Invictus Obi frequented the US while he was committing fraud and American companies were affected.

The agency also insisted that it obtained evidence from Obi by due process, thereafter pushing for the commencement of trial for the former Forbes billionaire.

Wire and computer fraud attracts a jail term of 10 and 20 years respectively in the United States.

Obi stands accused of stealing $11 million through wire transfers from the UK office of Unatrac.