A former Assistant Superintendent of Police (ASP) with the Nigeria Police Force has been arrested with ten other gang members for theft. The retired officer and his team were said to have forced their entry into a property that belongs to the National Public Security Communication and stole two GBW 10KVA generators.

While parading all the 11 suspects involved in the theft, Bauchi State’s Police Public Relations Officer, Kamal Abubakar they caught the suspects after receiving a report of the incident.

He stated, “On January 16, 2019, around 1 pm, following a tip-off, operatives attached to the State Intelligence Bureau of the command intercepted 11 suspects.

“The suspects were arrested in possession of two GBW 10KVA power generators vandalized at two sites of the National Public Security Communication System project in Alkaleri Local Government Area, along the Gombe Road in Bauchi State.”

He further explained that cases like that are part of the reasons why the federal government is skeptical of providing advanced weapons to security agencies in carrying out their duties. He noted that the fear of the wrong usage of gadgets has been a dent on the government’s input. 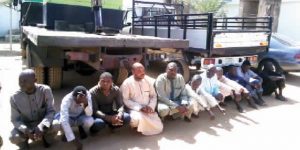 Kamal explained, “The suspects were on the wanted list of the command in connection with vandalism and theft at some telecommunications site equipment belonging to both the government and private companies in Bauchi State and neighboring states of Gombe and Yobe.”

The police also recovered two trucks from the suspects.

While confessing that he was guilty of the charges, Ewona, the retired ASP, who also happens to be the gang leader, said, “I retired as an officer of the Nigeria Police Force; I was an ASP before my retirement in 2011.”

JAMB registers over 300, 000 candidates for UTME in one week