However, a fresh counter evidence has surfaced on social media to debunk the rumours.

Lewis, on Thursday, revealed her romance with Dangote and how Africa’s richest man “broke my heart in 1000 pieces”.

Lewis revealed numerous intimate images of her and the businessman in compromising positions.

While writing on her Instagram handle (@Iambealewis), she praised Dangote for improving her “work ethic,” helping with her “fitness” and boosting her “finances”.

“I dated the richest black man in the world. He broke my heart in 1000 pieces. I learned more from him than any person I’ve ever met. Communicating with a billionaire daily makes you see the world differently,” she wrote.

“I became more organized and finally am able to step away from the daily kitchen operations. I learned love without strings. Give your best without expectations. Nothing is forever.

“I realized a half a million-dollar restaurant project was a bad investment. I purchased two properties. I started a consistent fitness regime. Became vegan. Obtained a profitable stock portfolio.

“He changed my perspective on work ethic and patience. Once my mindset changed the universe gravitated me to people that uplifted me and increased my net worth mentally and financially. To 2021 and powerful encounters,” she said.

The news sparked reactions on social media with many bearing their opinions on the latest development.

One twitter user, Mr Gump (@AYO_FAD), wondered what the Billionaire’s reaction will be after the news surfaced.

Another user, on Twitter, josh (@joshbillzz) exclaimed “Aliko Dangote has a Side Chic wow”.

Popular Nigerian author and lawyer, Samuel Mbah (@Mbahdeyforyou),  even went as far as blasting the alleged ex-lover for not getting pregnant for Dangote, describing it as “a shame”. 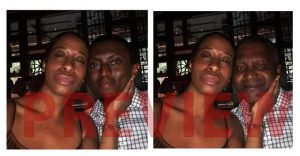 However, in a twist to the saga, a Twitter user Aliyu Shuaibu (@aleeyu_shoaib), dug deep and provided images (see above) showing that the picture posted by Bea Lewis were photoshopped.

“All these things are photoshops please. We will be seeing more. This 2021 is Dangote matter some people want carry throughout,” he said.

As at the time of publishing this news, Aliko Dangote was yet to react to the news.

Ijaw Youths Agitate For Own Regional Security Outfit, Like Biafra and Amotekun

‘I’m 82; you should pray to get to my age’ – Customer slams UBA staff over cash…