A feminist group, North Normal and three leaders of the group, Farida Adamu, Hassana Maina and Fakhriyyah Hashim have replied First Lady of Kaduna State, Hadiza El-Rufai’s threat to sue them for libel if they failed to tender an apology within seven days.

Writing through their lawyers, Ephesis Lex to the First Lady’s lawyers, Aidan Partners, they demanded she retracted her demand for an apology within 14 days and tender an apology instead.

It all began when the First Lady’s 32-year-old son, Bello El-Rufai two weeks ago had a Twitter spat with another user, one Consigliere with the handle @thanos_zer.

He allegedly threatened to gang-rape the Twitter user’s mother, tweeting: “Tell your mother I’m passing her to my friends tonight. No Igbo sounds please! Tueh.”

In an apparent reaction to the controversial tweet, which created a social media outcry, the First Lady had tweeted: “All you people talking about @B_ELRUFAI, Don’t @ me. Sow the wind, reap the whirlwind. All is fair in love and war. My belief: Respect everyone, but take no shit from anyone. I didn’t see any threats of rape. I would never condone that.”

She later tweeted to condemn her son’s action and tendered an apology.

However, in a statement, North Normal claimed that the First Lady endorsed her son’s reprehensible tweet in her first comment.

“The endorsing comments by his mother, Hadiza Isma El-Rufai, who is the Kaduna State first lady as well as the head of the Kaduna State sexual assault task force, justifies his threats and argues that “all is fair in love and war”.

“The very foundation of the saying “all is fair in love and war” is a product of the crude feudal era where accountability of atrocities evaded society at large. We do not live those times anymore,” the group’s statement read in part.

North Normal also demanded her resignation as head of the Kaduna State task force on sexual assault, questioning her competence to continue to lead a panel combating sexual violence. The group also demanded a public apology from the First Lady.

But in an April 20 letter signed by Kunle Ajagbe on behalf of Aidan Partners, Mrs El-Rufai said that the group’s statement defamed her by claiming she endorsed her son’s comment which she never did.

Read Also: The Truth About COVID-19 In Nigeria – By Ebun Adegboruwa, SAN

Furthermore, she said she tweeted three times to condemn the controversial comment.

She also debunked the group’s claim that she chairs the Kaduna State Sexual Assault Task Force, stressing that she could not resign from a position she does not hold.

The letter described Mrs El-Rufai as an architect, a writer, a patron of the arts and a committed champion of women’s rights, saying she is greatly distressed that her reputation had been damaged and stained by North Normal’s statement.

“She has been portrayed as liable for her 32-year-old son’s statements, cast as a hypocrite who is unfit to hold a significant position which defends the rights of women in Kaduna State. Being a public figure, who is held in high esteem both in Nigeria and abroad, such vilification of our client is unacceptable,” the letter read in part.

Thus, she demanded a retraction and unreserved apology from the group within seven days.

She also demanded that each of the three leaders of the group post a one-minute video of an appropriately remorseful apology and retraction on their individual Twitter pages and also a retraction and apology published in Daily Trust and Punch newspapers.

But in a letter dated April 24 and signed by Abdul Mahmud, Esq and Ejike Onukaogu, Esq for Ephesus Lex, the group and its three leaders said they would not be retracting their statement or apologising to the First Lady.

See screenshot of letter below: 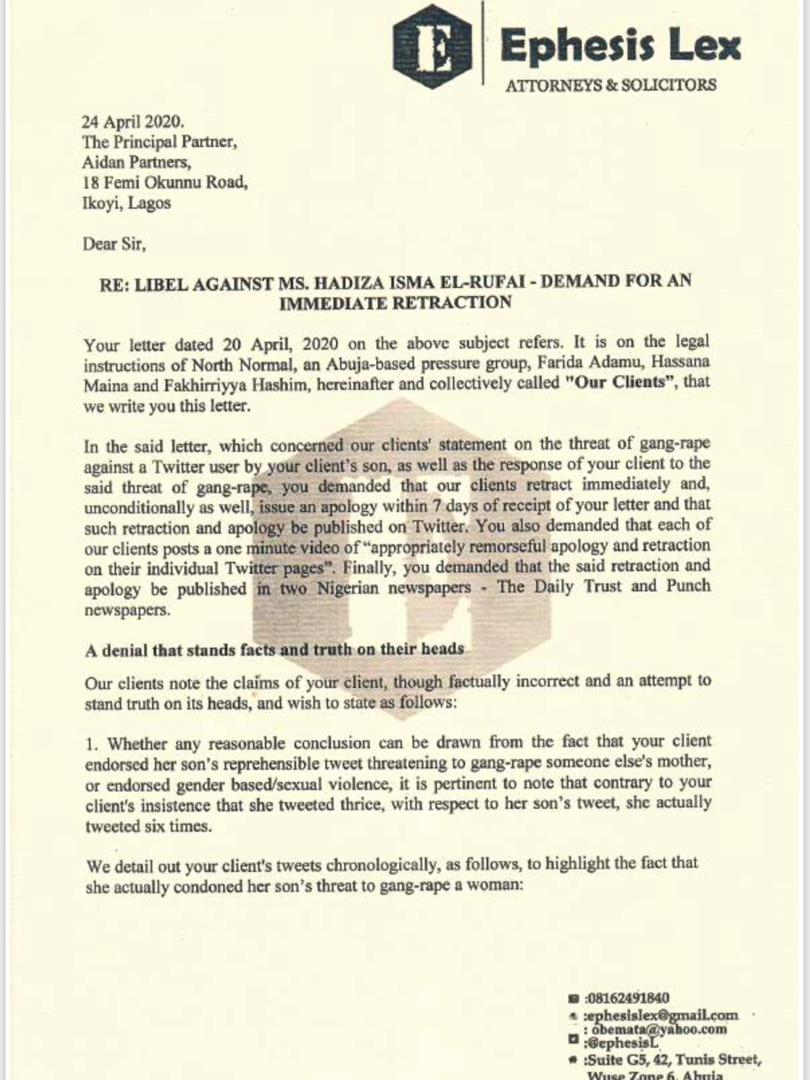 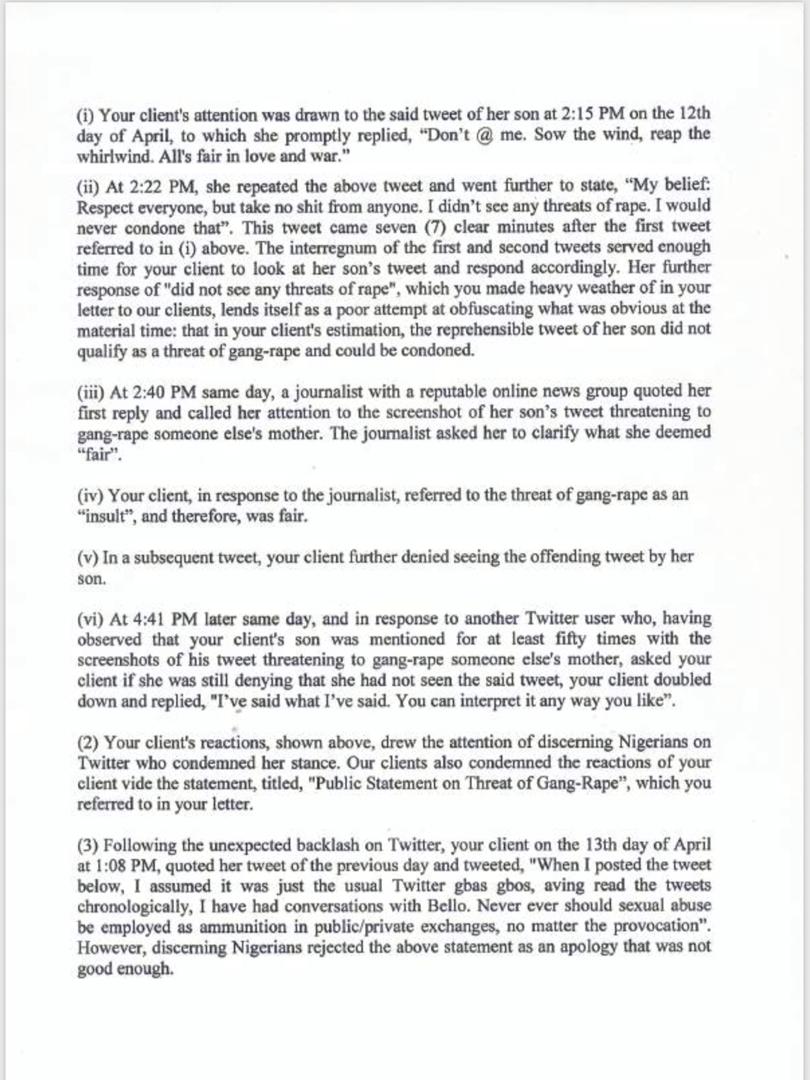 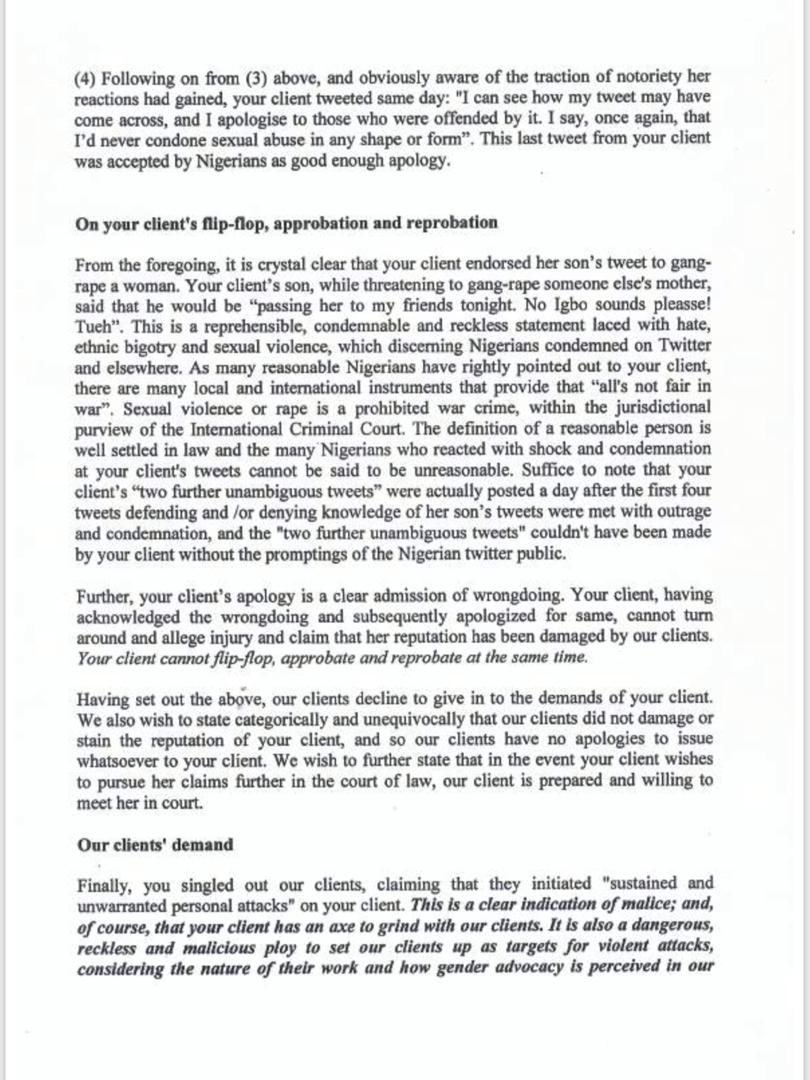 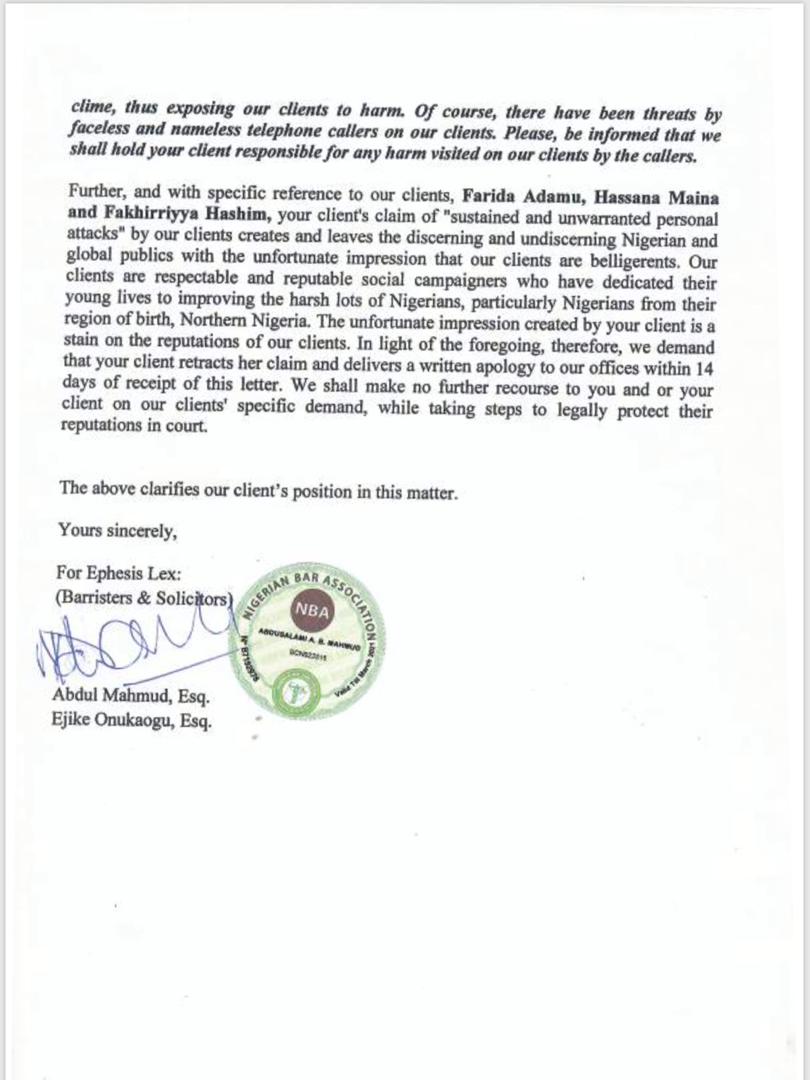 Williams Uchemba Reveals Why He Was Labelled A Fraudster