A senior pastor has been apprehended by police officers in Ejigbo, Lagos after he reportedly slept with some young boys and infected them with HIV in the process.

The suspect Pastor, Chizemdere Ezuma, is said to be the owner of Jesus Intervention Household Ministry.

The Nation reports that the pastor had been declared wanted for over three months but he continued to dodge police officers.

The pastor, however, met his Waterloo when a police informant notified some officers that he was back at his residence a few days back.

Ezuma went ahead to hide inside the roof of his house for many hours as soon as he realized that his cover had been blown. But his actions did not dissuade the officers as they patiently waited and arrested him in the end.

The initial case which led to the indictment of the pastor, involved one Prince Chinecherem, an alleged male prostitute.

Chinerecherem had been arraigned after his 16-year-old partner, Anthony Ikem, confessed to having sexual intercourse with him.

Ikem further revealed that he was just one of the many sex partners of Pastor Ezuma who sends them out to have sex with other prominent male individuals in the society. 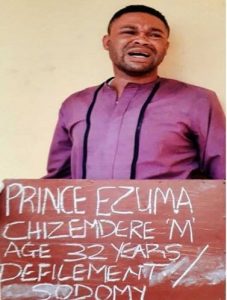 Ikem has since tested positive for HIV.

Residents in the area have also complained that they were concerned that the pastor may have corrupted their male children as well, hence they helped in ensuring that he was apprehended.

Ezuma confessed that he paid the boys two thousand naira each whenever they sleep with clients and he uses about fifteen of them whom he had initially slept with.

A source equally stated, “The reverend confirmed he is HIV+ and has been receiving treatment for over three years. So, he knew he was HIV positive and still infected his victims and clients with it.”