The court-endorsed Acting National Chairman of the All Progressives Congress (APC), Chief Victor Giadom, has written to the Independent National Electoral Commission (INEC) to demand the cancellation of Monday’s gubernatorial primaries of the party in Edo State.

According to a copy of the letter sighted by the media, Giadom said he did not authorise the conduct of any gubernatorial primaries in the state.

Below is a copy of the letter. 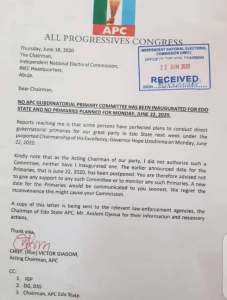 Meanwhile, Pastor Osagie Ize-Iyamu has emerged winner of the Edo State Gubernatorial Primaries of the APC held on Monday, June 22.

Ize-Iyamu, an ally of the suspended National Chairman of the party, Comrade Adams Oshiomhole, beat two other aspirants – Pius Odubu and Osaze Obazee – to clinch the party’s ticket for the September 19 gubernatorial election.

The Herald gathered that the primaries were conducted in 18 local government areas of the state.

The Chairman of the electoral committee and Imo State Governor, Senator Hope Uzodinma, announced that Ize-Iyamu scored 27,833 votes while Odubu, the former deputy governor of the state, came second with 3,776, and Obazee garnered over 2,000 votes.