A stunt gone wrong has caused a man his life in Rivers state. The deceased is said to have gone to a beach in Abuloma with his girlfriend to have fun. He supposedly drowned gradually while his friend filmed the whole process because she felt his pleas for help were not genuine.

The victim’s cousin explained that he was indeed at a shallow area of the beach and must have drowned as a result of the dredging being carried out in the area. He said that the ground must have opened up and trapped him, and even though he raised his hands for help, the lady with him thought he was merely calling her to join him in the water, so she declined.

Security operatives subsequently had to view the video she recorded during that period before they could understand why she couldn’t help her friend.

See the tweets about how the incident occurred below. 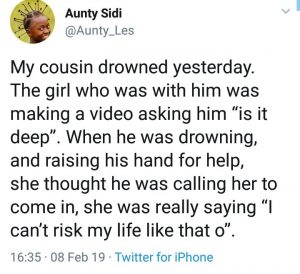 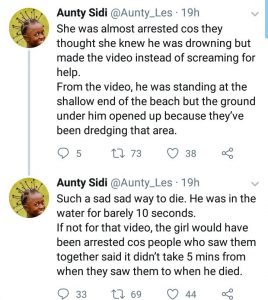