In an Instagram post that has been generating diverse reactions, he argued that God could not be in heaven going by scriptural teachings.

Harrysong quoted the Biblical text Genesis 1:1 which states that “In the beginning, God created the heavens and the earth”.

The singer queried where God was when he created heaven, noting that it was not possible to be in a location and then come around to create the same location.

“How possible is it for you to be in a location and later create that location??? GOD IS NOT IN HEAVEN” the musician stated.

He said it was necessary for people to “study, think and research” instead of just accepting whatever they are told. 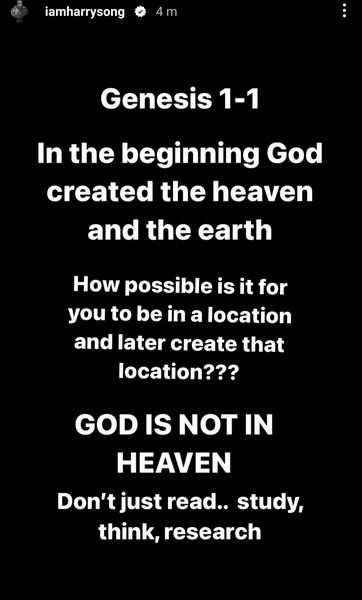 In March, Harrysong alleged that he was being blackmailed by a “runs girls” he dated six years ago.

He said the lady claimed to be in possession of his sextape and threatened to release it to the public.