Goitre is a condition that affects the normal functioning of the thyroid gland and causes it to increase in size. 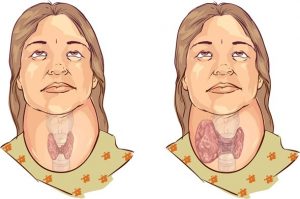 The thyroid is a gland found in the neck region, directly below the Adam’s apple. This gland secretes hormones that assist in the regulation of bodily functions such as metabolism, heart rate, mood, digestion and respiration.

The basic symptom of goitre is a significant swelling on the neck. The presence of nodules in the thyroid causes it to range in size from very small to very big and may increase the appearance of swelling.

Some other symptoms can include:

Iodine deficiency is the major cause of goitre. Iodine plays a vital role in assisting the thyroid to produce thyroid hormones. In the absence of sufficient iodine, the thyroid works tirelessly to ensure thyroid hormone production, thus resulting into the enlargement of the gland.

Goitre can also be caused by a number of things like thyroid cancer, pregnancy, inflammation, Graves’ disease, and nodules.

There are three types of goitre that have been identified.

The greatest risk of having goitre is for those who are:

After the diagnosis of goitre, it is important that the patient increases his or her iodine intake.