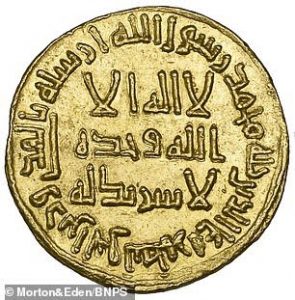 One of the historic gold coins in the world linked to the Caliph, a successor of Prophet Muhammad, in the north-west of what is now called  Mecca in Saudi Arabia, has been sold.

The coin called Umayyad believed to be 1,200 years old has sold for £3.7 million which is equivalent to over N1 billion.

The Umayyad coin, was sold at London auctioneers Morton & Eden, carries a number of Islamic inscriptions, as well as the words ‘Mine of the Commander of the Faithful’.

The reports also claimed that the coin became the most valuable and sought-after on Wednesday, October 23, when it was sold at the whopping price.