Google to unveil Pixel 4 and Pixel 4 XL in October

Google is set to unveil their latest smartphones, Pixel 4 and Pixel 4 XL on October 15 during the Made by Google event.

In an invite sent to select media personnel, the company confirmed the development.

The invite didn’t give much by way of details, but it captions, “Come see a few new things Made by Google” 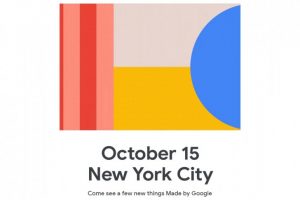 There were leaks of the device, numerous pictures and including a video.

The phones will rely on face recognition system, which is similar to the iPhone’s.

A gesture sensing feature called Motion Sense will let you perform different actions like changing songs and silencing calls and alarms by waving your hand as seen in the video below. This is the feature it appears google will push in advertising the Pixel 4.

There will also be a feature called “Reach to check phone” that activates the screen when you hover your hand over it to display notifications, time, and other information similar to what we’ve seen on a few Moto phones.

VIO to enforce new licences for Uber, Bolt others in FCT