A Georgia Grand Jury has officially indicted three men for the murder of Ahmaud Arbery on February 23.

According to the District Attorney of Corb County, the three men, Gregory McMichael 64, his son Travis McMichael 34 and their neighbour, William Byran 50, were indicted on charges of malice and felony murder.

Ahmaud Arbery was shot and killed after he went jogging through a neighbourhood where the McMichael’s lived. Both men chased down Arbery and shot him fatally. 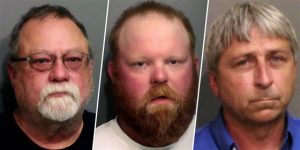 Their neighbour, Bryan is also accused of joining in the chase, and using his truck to box in the late Arbery before he was shot.

“This is another step forward in seeking justice for Ahmaud.

We will continue to be intentional in the pursuit of justice for this family and the community at large as the prosecution of this case continues.”